You are here: Home / Blog / Georgia On My Mind / Atlanta’s Song Bird Journalist

It was a normal day at Atlanta’s Union Depot in March 1895. Dozens of horse-driven cabs were parked along the sidewalk by the carshed waiting on possible fares. One of the cab drivers was a colored man by the name of Will Clemons who threw up his hand and said, “Cab, sir.  Want a cab, Judge?” referring to Judge D.A. Newsom as the judge exited the carshed.

The photo below shows a view of “Wall Street and the Union Depot in 1895 looking west along the railroad tracks from west of the Whitehall crossing toward the carshed” (courtesy of the Atlanta History Center). 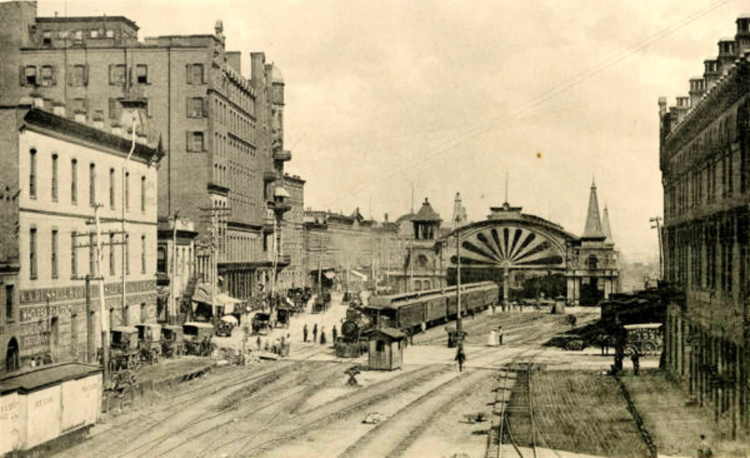 More than likely you have no idea who Judge Newsom was, but in 1895 folks in the city of Atlanta either knew Newsom or were at least familiar with him. Judge D.A. Newsom was a rather flamboyant older man who had seen better days. He was well known for hanging about the halls and offices of the Georgia legislature when it was in session, the lobbies of the better hotels such as the Kimball House, and unfortunately had a habit for making an ass of himself most days.

Instead of accepting or refusing the cabdriver’s offer for a ride, Newsom took great offense believing the cabdriver was teasing him and grabbing a whip from another cab he began beating Clemons with such fury that the poor cab driver tried to retreat immediately. A few days later both men appeared before Recorder Calhoun who tried to sort out the matter.

Judge Newsom, a man of 66 years, appeared in court as he did anywhere else flamboyantly dressed including a large, lustrous rose pinned to the dingy lapel of his coat. He also had at least one daisy in each buttonhole down the front of the coat. Newsom’s shaggy, gray beard was so long it reached the rose, and when he talked the movement lifted the red petals up ruthlessly which helped to waft the rose’s fragrance throughout the courtroom.

This silhouette of Newsom appeared in The Atlanta Constitution dated November 28, 1899 (12). 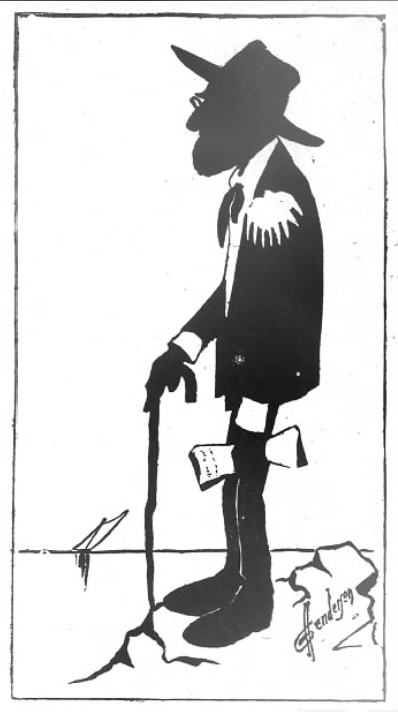 Judge Newsom told his story to Recorder Calhoun rather fast because he was mad. In fact, he was furious. His small eyes flashed with rage and his voice trembled as he brought his fist down on the desk to make his point with such emphasis that the perennial smile on the clerk’s face contracted immediately. Newsom told the recorder that hereafter whenever a cab driver approached him in an insolent manner, he would put a hole in the driver big enough to drive through.

In response the cab driver told Recorder Calhoun he was merely doing his job which was offering rides to folks exiting the carshed. Clemons said, “I just asked if he wanted a ride. Before I knew it [Judge Newsom] attacked me with the whip.”

Judge Newsom angrily responded, “That’s lie!”  Recorder Calhoun cautioned Newsom that it was his place to decide if the cab driver was lying or telling the truth. Other cabmen came forward to testify and supported Clemons.

Of course, Recorder Calhoun ruled the cab driver had not violated any laws, and of course, Judge Newsom’s fury was unbounded.

As he left Recorder Calhoun’s courtroom Judge Newsom was on the warpath stating next time, he would take the law into his own hands and that he would reduce the head of the next cabman who said anything to him into pulp.

After learning about this episode in Judge Newsom’s life I was hooked and went down the research rabbit hole. What I discovered was several such episodes. Newsom’s life, seemed to start off normal for someone born in 1829 to a Georgia planter, but at some point, it all went terribly awry and he became an object of ridicule.

I’m not really certain as to when Newsom became a well-known singer, but one of the first mentions of Newsom’s efforts at public singing in the newspapers was in June 1887 while he was still living in Athens.  It was announced he would give a concert consisting of “comic and sentimental songs” at Atlanta’s DeGive Opera House assisted by an “elegant lady pianist and superb string band.”

The concert would be given at the first DeGive Opera House which was located at the northeast corner of Marietta and Forsyth Streets and seems to be the lesser known of the two DeGive theaters. The second ended up being the famous Lowes Theater where Gone with the Wind had its Atlanta premier. The first DeGive theater would later become the Columbia and Bijou theaters before being demolished in 1921. This photo shows the first DeGive Opera House during its Bijou Theater days (courtesy of Wikipedia/Ed Jackson). 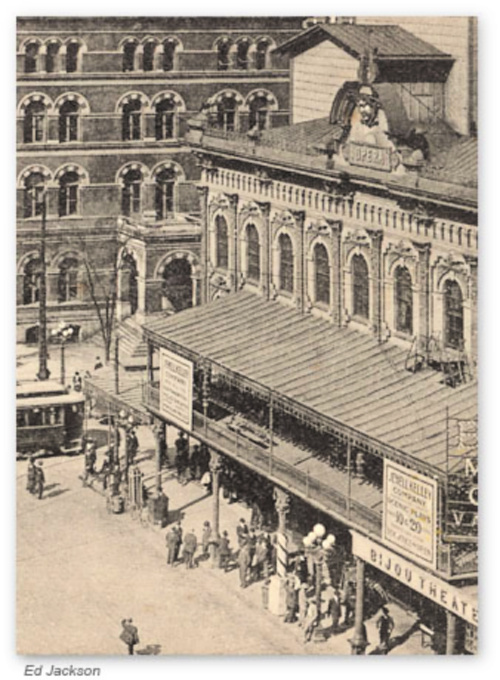 After checking further, I discovered there was a concert given by the Atlanta Musical Association on the night of June 22, 1887, but I have no proof Newsom sang that night nor do I know for sure it was the first time he sang what would become his signature piece – The Lone Rock by the Sea. If he did sing, his name did not make it into the official program that was published in The Atlanta Constitution for June 21, 1887 (5).

No review regarding Newsom’s performance was given in the days following the concert, however, later mentions of Newsom performing his signature song would appear in newspapers from time to time. In the 1890s Newsom would show up to sing The Lone Rock by the Sea as part of the activities before the state legislature would adjourn. Many felt “the dissolution of the body would not have been complete without the deep-toned voice of the judge as he warbled the song…”

Newsom would also sing his signature song at small concerts around Atlanta. In July 1894 Newsom sang the song at the Fourth of July festivities at East Lake. He even sang it in Washington, D.C. at one point.

In July 1893 it was reported Newsom sang his famous song underneath the window of a much younger Atlanta woman and then had the nerve to bill her for a bouquet of flowers. This was not a bouquet he offered the young lady but ended up adorning his coat as Newsom sang.

I also became interested in the song The Lone Rock by the Sea. What did it sound like?  Who wrote it?

The Lone Rock by the Sea was written by Charles Crozat Converse (1832-1918), an attorney who mainly composed Christian hymns. The song dates to 1857. Converse’s most notable hymn is What a Friend We have in Jesus where he wrote the music and Joseph Scriven wrote the words. You can see the cover to the sheet music for The Lone Rock by the Sea that is on file with the Digital Media Repository at Ball State University below. Though the title is a bit different (missing the word “Lone”) it is the same song Newsom sang in Atlanta. 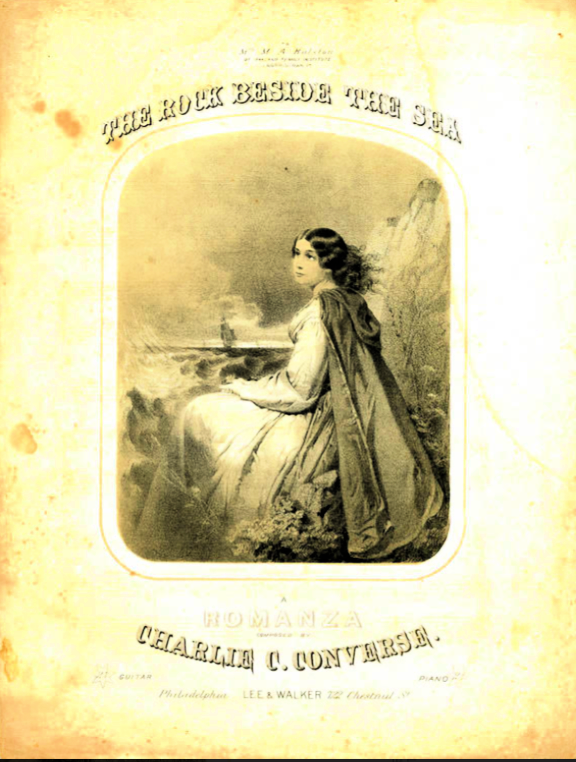 Some musicologists say the song is derived from a Croatian/Serbian folk song with the title Mary Is Sitting on a Stone Well. There is also a connection between The Lone Rock by the Sea and Queen Liliʻuokalani, the only queen regnant and the last sovereign monarch of the Hawaiian Kingdom. When she was in confinement at the Iolani Palace, some of her time was spent composing music. One piece of music we know today as Aloha ‘Oe or Farewell to Thee written in 1878. The song came to be regarded as a symbol of, and lament for, the loss of her country.

Musicologist state that parts of the song resemble the song The Lone Rock by the Sea. You can decide for yourself by clicking here to listen to the song being performed in more contemporary times.

I have much more to relate regarding David Andrew Newsom also known as Judge Newsom from his time as Ordinary of Greene County to being a newspaper man which I will share in another web article soon!

It was a normal day at Atlanta’s Union Depot in March 1895. Dozens of horse-driven cabs were parked … END_OF_DOCUMENT_TOKEN_TO_BE_REPLACED

When I throw out the name John Wilkes Booth what comes to mind? Perhaps you think about Booth’s … END_OF_DOCUMENT_TOKEN_TO_BE_REPLACED

I was busy working on my column for the Douglas County Sentinel, so I did not see the delivery … END_OF_DOCUMENT_TOKEN_TO_BE_REPLACED