You are here: Home / Blog / History Is Elementary / Dr. Lovejoy and the Kaiser’s Mustache

Dr. Esther Clayton Lovejoy was in Douglasville, Georgia on the night of Sunday, May 26, 1918.

Her name doesn’t ring a bell with you?

Dr. Lovejoy was quite the star on the speaking circuit during the last six months of World War I.

My local paper, the Douglas County Sentinel stated, “Dr. Lovejoy spoke at the Methodist Church Sunday night. She is directly from the front where  she served as a Red Cross [doctor], and her [discussion] regarding the barbarities of the Hun were such that it makes the blood of every patriotic American boil with righteous indignation.”

During a time when women were not allowed to vote Dr. Lovejoy attended college and then medical school becoming one of the few female doctors in the United States. During her long career she “transformed the Portland Board of Health in Oregon, regulated the milk supply, provided funds for school nurses, and assisted Portland in gaining a national reputation for its high standards of sanitation – many things that we simply take for granted these days. 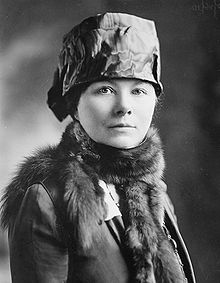 In the fall of 1917 Dr. Lovejoy bravely headed to France to work in Red Cross hospitals and to investigate the conditions of women and children in the war theater. She then traveled through the United States sharing her experiences and observations while at the Red Cross receiving station at Evian, France.

She told audiences, including the one in Douglasville, Georgia, of the “tragic French and Belgian exiles, who after suffering the loss of their loved ones as they joined the armies of France, were trapped by the Hun in the first rush to Paris.”

At Evian, France she saw people who in her words “had no military value to the Germans – women over forty-five, girls three to sixteen years old, boys three to fourteen years old, the feeble, the sick, the insane – people from every walk of life but all had in common the fact their cities, homes, and towns had been invaded.

Dr. Lovejoy would hold her audiences spellbound sometimes for as long as two hours as she told them, “Once these people were herded together and the useful were separated from the useless, the latter class [was] sent to Belgium where they were kept for six weeks in order that any useful information they [had] would be [of no value]. Then they started on their three-day journey through Germany and Switzerland, and [were] then dumped on France at Avignon.”

Dr. Lovejoy would further relate to her audiences a total of 350, 000 refugees had passed into France. One group included 750 children alone, and trainloads of the insane were sent through at one time. She told how “sons and husbands [had] died with honor on the battlefield or [were being] held in slavery behind the lines.”

She strongly “emphasized in her talk how the French women wanted nothing more than revenge for the mental and physical atrocities they had suffered at the hands of Germany and her allies” including rapes and the kidnapping of their older girls  – many who would never be seen again.

Dr. Lovejoy carried several items along with her to display at her speaking engagements that had been “secured on the battlefields including children’s gas masks, 75 millimeter shells, and a German helmet which carries the marks of a death warrant dispatched from an American rifle stopping the mad rush of at least one Hun on the way back to Berlin.” 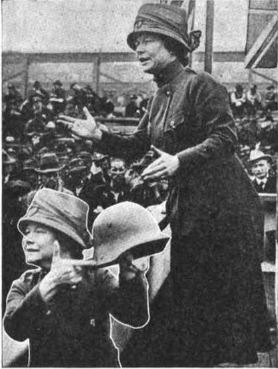 My original goal for expanding what was a small article in my local paper one hundred years ago was to discover more about a poem that was read/sung that night in the Methodist Church following Dr. Lovejoy’s remarks.

William D. Upshaw was invited to the podium to provide the lyrics for his poem/song regarding the Kaiser’s mustache. Upshaw was the brother of Lucious Herschel M. Upshaw, two important merchants and political leaders in Douglasville from 1891 through 1930.

William D. Upshaw was in the process of running for the congressional seat for the Fifth District of Georgia in 1918 – a seat that he would win and hold for four terms.

This song is to be sung to the tune of Bonnie Blue Flag, the song often sung by southerners.

“Turn the Moustache Down”

There is a guy across the seas –

“The Kaiser” is his name;

He thinks that blood and booty will

He wears his mustache all turned up –

It surely is a sight;

And now it’s up to Uncle Sam

To fix that mustache right.

Despite the Kaiser’s frown

We will help your dear old “Uncle Sam”

To turn the mustache down.

That Kaiser Bill he struts around

He claims for “Me and Gott” the right

And if you dare to say to him nay

He rages low and high –

He gives that proud mustache a twist

With fury in his eye.

That German Kaiser is a blight

To all the peace of earth;

He feeds upon the blood and tears

That are of Prussian birth;

And we shall ne’er have peace again

Until the “war lords” fall

And “Uncle Sam” shall wave our flag of freedom over all!

I didn’t locate much about the poem/song other than two journals with one giving credit to William D. Upshaw. I have no doubt that he did pen the lyrics to this song because following an accident early in his life where he was paralyzed, he became well known as a writer for The Sunny South, an Atlanta paper, under the pen name “Ernest Willie”. 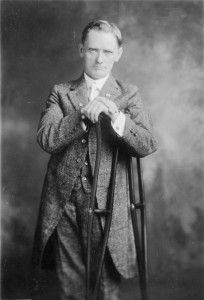 In 1932, William D. Upshaw ran for president against Franklin Delano Roosevelt on the Prohibition ticket.  I always find it a bit ironic that the 1932 election had TWO handicapped individuals running for president. Upshaw was very open about his disability while President Roosevelt hid the severity of his.

If I was still in the classroom Dr. Lovejoy’s efforts overseas and Upshaw’s poem/song would most certainly find their way into my World War One teaching unit.

I discuss the Upshaw family including William D. Upshaw’s run for president in my latest book, Every Now and Then: The Amazing Stories of Douglas County. Click the title to see how to purchase.