You are here: Home / Blog / Georgia On My Mind / Banishment in the Twenty-First Century – Georgia Style 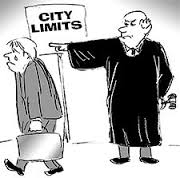 In 1974, the Georgia Supreme Court upheld a criminal sentence for a woman who was banished from seven different counties for a year.

While I do have a list of folks….a very short list…running through my mind that would make great candidates for banishment from my county, I have to wonder what do you have to do in order to be banished.

After some checking it seems that habitual bad check or drug charges are at the top of list, but seriously…

How can banishment happen in the 21st century?

For the answer we have to go back to the 19th century when Georgia’ s Reconstruction-era constitution was written (1877).

It clearly states Georgia citizens can be whipped or banished “beyond the limits of the state” meaning we can’t banish someone to the wilds of Alabama…though some deserve it.

Georgia prosecutors and judges interpret the language to mean as long as the banishment is within Georgia’s 159 counties it’s allowable.

DeKalb County seems to use banishment more than most counties often telling drug offenders they are banished from 158 of Georgia’s 159 counties leaving tiny Echols County as the number one travel destination for folks who are banished.

Now before your vision becomes clouded with thousands of U-Haul trucks heading south for Echols County I need to advise those who are banished are rarely checked on due to manpower and funds. However, it does seem like it might be a good use for some of those forfeited assets that some DA’s like to spend willy nilly.

Echols County, as far as I know isn’t the hotbed of crime it could be due to all the banishments. It IS known for two small towns and one traffic light. The county seat, Statenville is so small it’s not even incorporated. Echols is one of three counties in the state that has a county seat that isn’t incorporated.

In the beginning Statenville was actually known as Troublesome. I don’t know the reason, but it seems to me that if they changed the name back to Troublesome it WOULD be the perfect place to banish troublesome folks.

Thinking a little bit more about the provision in the Georgia Constitution that mentions banishment…..it also provides for whipping.