You are here: Home / Blog / History Is Elementary / The Bonds of Friendship

In the years leading up to World War I there lived in a little Alabama town three young men who were known all around town as best friends. They did everything together, so it was no surprise when they grew to manhood they entered the railway division of the  postal service.

George T. Booth was stationed in Montgomery while L.C. Boyd, who lived in Atlanta, and Herndon Glenn Swanson, who lived in Fairburn, both worked in the same department working on one of the mail trains running between Atlanta and Montgomery.

When the United States entered the first World War, Swanson was selected from the railway mail service by the Postmaster General to go to France in the interest of the mail service of the American Expeditionary Forces. After a six month stay in France, he was sent to Spasskoe, Siberia on a similar mission.

A Siberian location might seem like a strange place for an American to be during the war, but it was necessary following the Russian October Revolution of 1917. The new Bolshevik government signed a peace treaty with Germany. The collapse of the Russian front presented a tremendous problem to the Allied powers, since not only did it allow Germany to shift troops and war material from its eastern front to the west, but it also made it possible for Germany to secure the huge stockpiles of supplies left sitting at Russian rail depots and ports. The Allies including the United States would have none of that. Sadly, few days before he was to return home, Swanson contracted typhus, resulting in his death on July 17, 1919. At this time bodies were not always shipped home when the cause of death was a malignant disease.

Swanson’s dear friends, Booth and Boyd, heard of his death and grieved as only strong men can for a true friend. They had to come to terms their friend would remain in his ice-covered resting place in Siberia, and always when their thoughts were of him, they pictured him sleeping in the barren, frozen soil of Siberia, or as they last saw him, laughing and talking as they stood on the depot platform in Montgomery where the three gathered every time their schedules permitted, and talked over boyhood days.

During the time period the United States was involved in the fighting “over there”, it was a common sight for Boyd to see fifty wooden boxes draped with the American flag lying on the depot siding waiting to be transferred to another train. No matter the number from a solitary coffin to fifty laying on the depot platform Boyd had passed them by.

The same was true of Booth since the first mobilization it was no uncommon thing for him to glance out of his office across the station platform and see a flag draped wooden box.

Early, one bright, crisp morning about the first of October, 1920, Boyd completed his run, left the mail train in Montgomery and started up the platform. About twenty yards down lay a lone coffin. It was not in his path, and there was nothing unusual about it. He took a few more steps and stopped.

There was something appealingly lonely about this particular coffin. He made another effort to continue on his way to the office, but could not. An irresistible force unseen and unheard slowly guided him to the side of the wooden box.

When he reached the coffin, still chained by the unforeseen force, he raised the flag, and the metal plate under the coffin became the mouthpiece of the dead, and he read the name…“Herndon Glenn Swanson”.

A chill swept over the man as he stood on the same platform beside the body of his old friend. He dropped the flag back on the coffin, the only flag he had ever raised from its place during the entire time that he had come into touch with the draped caskets.

Boyd hastened into the office of Booth, where the former related his experience. When he had finished, Booth stated that not ten minutes before the train had pulled into the depot, he was looking out of his office and saw this coffin and, against his will he went down on the platform, raised the flag, and for the first time knew that the body of his friend had been removed from the country in which he died.

Their friend was home, and today, Herndon Glenn Swanson rests in the Fairburn City Cemetery. 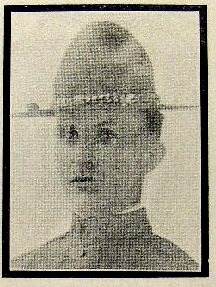