I’m always on the hunt for bits of history that fit in with my history column published in the Douglas County Sentinel each week, so when I came across a story regarding “nekkid” soldiers along the Chattahoochee River my “history radar” went into high alert.

I assumed the story would involve some young men skinny dipping to cool off, but imagine my surprise when I discovered Union soldiers were “nekkid” on purpose and during an attack.

First off let’s clear up the difference between the words “naked” and “nekkid”.  Both words involve being in the nude, but when you are “nekkid” you are up to something, so this group of Union soldiers were most certainly “nekkid”.

The date was July 9, 1864, and the place was along the Chattahoochee River identified as Cochran’s Ford where Columns Drive ends into the Sope Creek hiking area.

On July 9th Colonel Joseph B. Dorr ordered Colonel James P. Brownlow of the First Tennessee (Union) to assess the strength of the enemy on the east side of the Chattahoochee River at Cochran’s Ford. It was sunrise when Brownlow was able to report there were approximately 30 Confederates on the other side.

Dorr wanted his men to move on the enemy, but their horses would have made too much racket crossing the river, so Brownlow asked Captain Moses Wiley to take  two companies of men and create a diversion.

The plan was for Captain Wiley and his men to strip “nekkid” and charge towards the ford firing their guns while Brownlow hoped to cross and attack the Confederates from the rear.

In a letter to his father Colonel Brownlow picks up the action:

As soon as Capt. Wiley saw that I had nearly reached the opposite shore, [he and his men] charged very bravely, but missing the ford, when half way over, he and every man went plunging in over their heads, and just then the rebels opened fire upon them, and compelled every man to seek shelter under the large rocks in the river, as best they could.

Capt. Wiley was now in such a condition as to be unable to advance or retreat, and unfortunately left me and my ten men on the enemies [sic] side of the river, without help, and with a prospect of going to Atlanta sooner than we desired, destitute of even so much as a shirt. Not fancying this, and acting upon the maxim that ‘he who never bets never wins,’ I determined to charge upon the rear of the rebels, who were firing at Wiley’s party. My charge was a success, I completely surprised them and took them prisoners, and with them I captured a long ferry-boat, and returned to my command.

The sergeant in command of the rebels was a New York Dentist, who told me that he had been living in the South but a short time.–He said he never was more surprised, and did not think any person was bold enough to swim a river and attack them. Gen. Sherman is said to have been pleased with our exploits, and the ‘Special Artist’ for Harper’s Weekly has prepared a sketch of our charging the Chattahoochee.

This is the sketch by Theodore R. Davis that appeared in the August 13, 1864 issue of Harper’s Weekly: 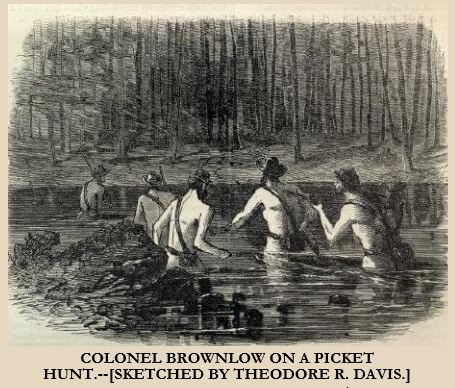 There were several interactions between the Union and Confederate soldiers that summer all along the Chattahoochee River some chalked up in the win column for the Union and some for the Confederates, but in this case the win went to the Union. Some of the regulars chalked it up on the downside because it broke up the friendly chitchat back and forth between the enemy forces.

The morning after the “nekkid” advance a Confederate yelled across the river and the following exchange was recorded.

“What do you want, Johnny?”

“Oh! JIM BROWNLOW, with his d—–d Tennessee Yanks, swam over upon the left last night, and stormed our rifle-pits naked–captured sixty of our boys, and made ’em swim back with him. We…have got to keep you… on your side of the river now.”

Brigadier General Edward M. McCook (Union) later described the operation in his official report as “one of the funniest sights of the war”.

I tend to like author David Sherman’s impression of the “nekkid” advance in his book Sherman’s Horsemen – Union Cavalry Operations in the Atlanta Campaign….”They would have got more but the rebels had the advantage of running through the bushes with their clothes on.”