You are here: Home / Blog / Georgia On My Mind / Chinchillas, Ponies and Donkeys…Oh My!

Growing up in Red Oak, Georgia along U.S. 29 or Roosevelt Highway my father indulged my sister and I with just about every pet imaginable with reptiles being the exception. Of course, we had the regular assortment of dogs and cats that just seemed to take up with us…usually at a time when they were about to bless the world with a litter of puppies or kitties, but we also had a few unexpected animals of the more exotic type.

While Red Oak wasn’t exactly the city during the 1970s it was more city than country and considering we lived on the grounds of a large lumber yard….West Lumber Company…it wasn’t the spot where you would expect to find a large assortment of animals.

For example, we had bunny rabbits and colored chicks bought at the feed store in College Park during the springtime along with various ducks that would run around the yard quacking up a storm. I had little turtles bought with my allowance money from the Woolworth at Jamestown Shopping Center, and so many goldfish were flushed down the toilet at Red Oak I’m amazed my parents didn’t have serious plumbing issues.

At one point we had six chinchillas. My sister and I loved waiting for them to be in the right position in their cages so we could reach in and grab them by the tail…the only way to safely pick up a chinchilla since they have very sharp teeth and love to bite. Daddy had designs on breeding, raising, and selling the little critters, but at some point I think he finally realized all of our chinchillas were…alas….of the male persuasion.

Daddy, being the farm boy that he was, felt my sister and I needed to experience a cow…a calf to be more exact at some point when I was seven or eight. So, a baby calf was delivered to the house inside a rather large wooden crate. I say large because the crate was as big as my bedroom. Every single day our job was to give the calf his food and give him his bottle.

Yep, he had a huge bottle resembling a baby’s bottle with the longest nipple I’d ever seen. For a time it was one of the highlights of my day to visit the calf and give him/her the bottle. While he or she ( I really don’t remember) pulled and tugged at the bottle I tried to keep steady by using my other hand to pet the calf and I would tell him all my deep dark secrets.

Then there was the Christmas morning that my sister and I heard a commotion on the front porch along with a knock on the door. We had already waded through the stacks of presents under the tree and just figured company had come “a callin'”, so we opened the door not realizing yet another animal was about to enter our menagerie.

A pony had climbed our front steps and was standing on our front porch.  I couldn’t believe my eyes. From what I now understand our little pony had won several ribbons and various trophies, and his owner needed to retire him, so the pony came to live at our house for awhile.

It was a very exciting Christmas morning!!! 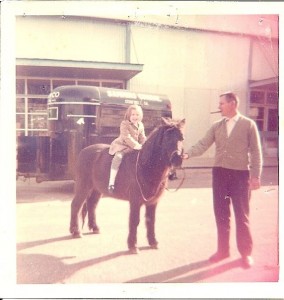 Then there was the day we found the donkey tied up in our yard. We never named our larger animals. The calf was The Calf….the pony was the The Pony…and the donkey was….you guessed it….The Donkey.  I felt sorry for him since he was rather homely in that donkey kind of way.  I mean….he was a donkey, right?

He put up with a lot from me. At my young age I patted, prodded, and rubbed him. I talked to him, hugged him, rubbed his nose, kissed him, fed him treats, and just generally loved him very much…probably too much because one day he figured out how to loosen the knot from the rope tied around one of our oak trees. I’d really like to think he just wanted to go exploring a bit, but more than likely he was trying to escape all of the love I tried to bestow upon him.

The donkey decided he’d take a trip down to the center of Red Oak. Instead of taking the highway he decided to run down the rail road tracks. I caught sight of him and my screams alerted  an employee of my father’s who set off after my beloved donkey. To make matters worse we could hear a train whistle in the distance, and I was afraid not only my donkey would be hit by the train….I was concerned for the man trying to rescue him for me.

Another hot summer afternoon I heard a commotion out on the highway in front of the house. I went to the porch and saw where the donkey had gotten loose yet again and ventured across the tracks and was standing in the middle of the highway. I had been told to never cross the tracks without an adult so…I commenced to hollering and crying afraid my donkey would get hurt.

Mom came running and hurried across the tracks to get to the donkey. Then I really began screaming and crying because now not only was my donkey across the tracks…so was my mother. When I was younger I had tremendous separation anxiety during most of my elementary years where my mom was concerned.

Looking back on it now the whole situation was hilarious….even though at the time I was scared and NOT amused. Not accustomed to seeing a donkey in the middle of Roosevelt Highway the traffic had come to a stop both ways and the cars were gingerly taking turns slowly making their way around my donkey…first one direction and then the other. The donkey…well, he just stood there on the center line of the road…just staring into space as most donkeys do looking off towards College Park with his rope dangling down his side and leading off behind him. Every now and then his tail would twitch and swat at a fly.

Mother grabbed the rope and tried to get him to turn around towards our drive so she could lead him home. The donkey would have none of that…..

He shook his head at her.

He bared his teeth at her.

By this time several folks were getting impatient and began to honk their horns upsetting all of us…the donkey, Mother, and me. The donkey didn’t like the car horns and began making noises.

Yes, he stood there in the middle of the road and began braying as loud as he could.

A few of the folks who actually knew us hung their heads out the windows as they inched by mom saying, “Heeey, Geri!”, “Having fun?”, or just attempting to give her advice or encouragement of some sort.

By this point the donkey was tired of the whole “game” and sat down. Yep, I now know why a donkey is often referred to as an ass or a Jackass to be more precise. The donkey just plopped his big fat ASS right down on the center line of Roosevelt Highway….just sat down and proceeded to ignore my mother for the next fifteen to twenty minutes.

Then as suddenly as he had sat down he stood up, turned around and walked back across the tracks and into our yard as if he owned the world and did that sort of thing every day.

My mother wearily looked on and then trudged on along behind him across the tracks, into our yard and up the steps. She didn’t even offer to tie him up. I think my dad did that once he arrived at the house.

Our donkey found himself put out to pasture at a family friend’s farm within the week where he proceeded to irritate the Mama Cows by trying to mother their calves.

Our family stuck to dogs and cats after that.