You are here: Home / Blog / History Is Elementary / I Claim This Beach! 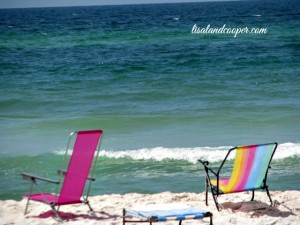 The beaches along the Florida and Alabama Gulf coast are lovingly referred to as the Redneck Riviera. It’s true – you see more cars with Georgia tags in Panama City Beach that you do on an Atlanta interstate.

I’m here this week with the Mister and our grown children for beach time and all that entails – seafood, interesting beach themed drinks dripping with fruit and served up in plastic mugs you can take home, and of course there’s the main draw – the beach.

I do love me some sand between the toes.

I’m really trying to avoid the work thing this week though I do have a column deadline with the Douglas County Sentinel, and I do have some pages to update – spinning those social media plates, you know?

But, I’m trying to be as quiet as can be.

The best way to remember this particular beach trip is by remembering another one from my teaching days when I laid claim to my spot on the beach.

It would appear that my compatriots here on the beach are all Southerners – our accents give it away. We’re a mixed bunch from Georgia, Tennessee, Alabama, and Kentucky. We’ve all been true to our Southern selves as we have smiled politely, said our how do you dos and where ya froms before retreating quietly to our own plots of sand.

We’ve all claimed our little colonies. Individuals and groups, large and small, huddle around their rented chairs and umbrellas with assorted coolers, bags, books, buckets, shovels, nets, and other beach accoutrements.

I’m reminded of the European explorers who arrived at shores like these sans condominium and came ashore bringing their supplies staking claim to land in the name of the king or queen back home, eager to explore their new land, and oblivious to the fact it belonged to others. We Southerners have done much the same this morning on our plot of sand as we planted our coolers in an effort to make the statement, “Here I am….this is MY space.”

The explorers who came to the shores of North and South America were all different and they came for different reasons. I can’t help but sit here as I observe my fellow Southerners and make a few comparisons between them and various groups that came to the New World.

Two women, two kids, and whiney girl are nearby. Whiney is about six or seven—-a butterball of a girl that I suspect whines simply to be whining. The repetitive music of the waves is broken every two to three minutes by a whine that resembles the beginning of a good cry but never quite develops beyond the opening notes. She whined because another girl was playing too close to her spot in the sand. She whined to go in the water, she whined to go back to the beach, and she whined to go up to the pool. Three hours of her whining and I was quite ready to slap her. Just to be sure I wasn’t being too hard on whiney girl I asked Daughter Dear to observe for a few minutes.

Daughter Dear said, “Damn, she is whiney!”“Shhhhhhh…….,” I said. No, I didn’t correct her for the expletive. There are times when damn is the appropriate response. I just thought she said it a little too loud.

Whiney girl reminds me of the Portuguese who began the whole exploration thing anyway. Oh, what whiners they could be! Rather than sticking it out and angered at what they saw as an overabundance of Spanish flags flying in North and South America the Portuguese whined to the Pope in hopes they could be given more rights to explore additional land. This resulted in the Line of Demarcation of 1493 and is the basic reason why Portuguese is spoken in Brazil and not in more of the South American continent. Not satisfied they whined some more and a second Line of Demarcation was set in 1494.

Some family groups come out en masse….grandmas, grandpas, mom, dad, kids, assorted aunts, uncles, and cousins. They invade quickly and suddenly. They are loud, overbearing, and irritating. They vanish just as quickly as they drift away to explore more, do a little fishing, throw a football, or collect some shells leaving their stuff behind in their wake. They remind me of the Spanish who made such a presence in North America for a long time, but began to drift away as more and more of the English ended up on our shores. The Spanish bit by bit slowly sank away to bide their time in Mexico and South America.

Quiet man and woman on one side of me and ultra-quiet no-sun-at-all woman on the other side of me are good neighbors. All three of us remind me of the many thousands of Europeans who came later after the initial explorers. They simply wanted to live their lives as they wished, beholden to no man. Quiet man and woman with their novels, me with my pen and paper, and no-sun-at-all woman with her crossword simply want to be. Yes, we are the stuff that will make this beach great!

A couple of spots around are all set up for folks but not a single solitary person has visited the claim, and I’ve diligently camped on my spot all day. I guess these folks could be compared to the French…..wanting a presence in the New World so much but too busy elsewhere to really make a lasting go of it. Yes, I remember the fur traders and I’m painfully aware of New Orleans across Mobile Bay from where I am sitting, but face it, they just really didn’t have what it takes to make it for the most part.

So here I sit…the sun is now to my right and it is slowly descending towards the water. Bit by bit my fellow Southerners are disappearing. Even Daughter Dear has gone in. Like my English forebears I still sit. They had a rough time of it in the beginning. Several attempts at colonization failed and there were starving times, yet they kept trying, and they remained.

I’m not leaving my colony on the beach. I’ve waited a year to be here, experienced a very busy year of book events, writing the next book, meeting a column deadline each week, spinning social media plates, etc., so sun-baked, hippie beach guy will have to pry my cold, dead fingers from my rented lounge as I intend to see the sun set. I intend to be the last Southerner on this beach today. That sort of attitude is what won the exploration race and forged a great nation.

By the way…….I was the last Southerner on the beach! 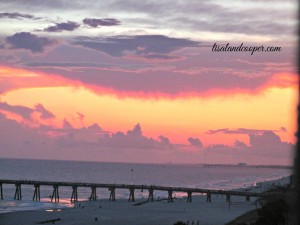 It was a normal day at Atlanta’s Union Depot in March 1895. Dozens of horse-driven cabs were parked … END_OF_DOCUMENT_TOKEN_TO_BE_REPLACED

When I throw out the name John Wilkes Booth what comes to mind? Perhaps you think about Booth’s … END_OF_DOCUMENT_TOKEN_TO_BE_REPLACED