You are here: Home / Blog / History Is Elementary / Here Come the Mercer Brides! 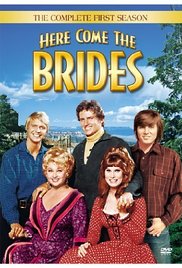 Sometimes I wonder how much money I spent during my youth on magazines such as Tiger Beat and 16 Magazine. It was the one way I could obtain all the pin-ups I wanted of my “favs” such as the Osmonds, David Cassidy, The Bay City Rollers and Rick Springfield.

I actually made the switch from buying Matchbox cars with my allowance money to buying teen magazines a little early.

Yes, that’s a little early to be reading a magazine written for giggly teenage girls, but then again, I did have an older sister, and I wanted to do everything that she did.

The other reason I began to buy the teen rags had to do with a special young man named Bobby Sherman.

Oh, be still my heart.

On September 25, 1968 Bobby Sherman entered my life and nothing was ever the same.  I’m sure he would tell you the same thing. It was a telepathic “thing”, but he and I were going to be together forever.

Of course that date in 1968 coincides with the premiere date of the popular television show Here Come the Brides when it aired for the first time.

All good things must come to an end though, and Bobby and I were no different. Our relationship cooled quite a bit after the show was cancelled in 1970. I went on to third grade, and Bobby continued with guest appearances on a long list of television shows and a stab at a musical career.

During the Here Come the Brides stint Bobby Sherman played the adorable and stuttering Jeremy Bolt who along with his older brothers traveled from Seattle to Massachusetts in the 1860s to recruit brides for the lonely employees at their logging mill.

While many of the details regarding the television show was a complete Hollywood fabrication, the premise of the show – lonely men in the Pacific Northwest needing brides – is based on a true story.

In 1864, Asa Shinn Mercer was the sole instructor and president of the Territorial University of Washington. He was chosen primarily because he was the only college graduate for miles.

At a time when men out numbered women nine to one, Asa had the idea to go east to seek ladies of quality and refinement to help balance the male/female ratio of the region.

Mercer devised a plan to head east to convince women to move to Seattle.

Even now in the very lenient, very free 21st century Mercer’s idea sounds a little harebrained – even scandalous to some.

Why on earth would a woman from a city like Boston or Lowell, Massachusetts want to travel across the country to Seattle – a rustic outpost where men were men and roughing it was the norm?

We could argue the women simply wanted to satisfy a sense of adventure, but refer back to the paragraph above where I introduce the name….Asa Shinn Mercer.

What year was it?

What was going on?

Yes, you are correct – it was the last year of the Civil War. Many of the eligible men were gone and many women felt they had a life of spinsterhood ahead of them at a time when a woman’s identity was strongly evidenced through her husband and his name.

During Mercer’s first trip back east he managed to convince ten women to return to Seattle with him.  All but two managed to marry fairly quickly once they reached Seattle.

The second trip was more problematic. By this time Mercer’s plans had reached a wider audience with newspapers such as the New York Herald.   The paper reported the women would find themselves in brothels or married off to old men once they reached Seattle. Mercer’s 500 prospects for the second trip quickly dwindled to 100.

However, that group of women is very important. Today, long time inhabitants of Seattle can trace their family lines back to those very women who took a chance and helped settle the Pacific Northwest.

You can find out more about the fascinating Mercer brides at this link.