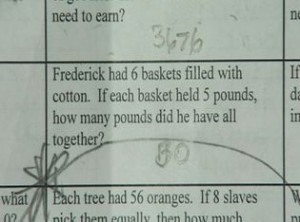 So, little Johnny or Susie brings home a teacher prepared worksheet filled with several math problems for homework. At some point a parent decides to check the answers or at least review the sheet to see what type of assignment had been given.

Some of the problems are troubling:

“Each tree had 56 oranges. If eight slaves pick them equally, then how much would slave pick?

If Frederick got two beatings per day, how many beatings did he get in one week?

Yes, I’m serious. This actually happened in a Georgia classroom per this link.

I hope you have a problem with these questions. I certainly do, and I applaud the parents in this situation for complaining.

Why would teachers include insensitive questions like those I reference above within a math assignment?

The spokesperson for Gwinnett County Schools advised the teachers were trying to provide students with a cross-curricular activity by incorporating social studies lessons into the math problems.

The school system agreed the questions were inappropriate. The assignments were gathered and shredded so they wouldn’t resurface. The spokesperson was quoted as saying, “The problem with the question is there is no historical context.”

True…there is NO context.

An article from the Atlanta Journal provides another quote from the system spokesperson…”It was just a poorly written question.”

Teaching across the curriculum is a little more involved than taking one aspect of a historical event and throwing a question into a worksheet.

These questions indicate something far more serious in my view than having no historical context and being poorly written.

They are without question insensitive and indicate the teachers involved have no clue regarding what “teaching across the curriculum” means.

Instead of focusing on the slavery issue the math questions could have taken a look at the large numbers of soldiers killed on both sides of the war where students could work on determining the differences between battles or averaging the numbers across a few battles similar to this lesson plan. This would open up discussion regarding the cost and benefits of war.

Here’s a lesson plan involving symmetry and the Civil War. 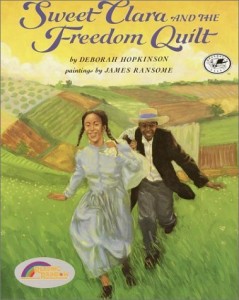 Another idea that would bring in the slavery issue but would be more sensitive than the worksheet questions I mentioned above involves freedom quilts to teach geometry. A great book to introduce freedom quilts to students is Sweet Clara and the Freedom Quilt.

There are lots of great resources out there to help teachers get on track with cross curriculum thinking….which is one of the reasons why I’m going to be shaking my head over this situation for a long time.

It was a normal day at Atlanta’s Union Depot in March 1895. Dozens of horse-driven cabs were parked … END_OF_DOCUMENT_TOKEN_TO_BE_REPLACED

When I throw out the name John Wilkes Booth what comes to mind? Perhaps you think about Booth’s … END_OF_DOCUMENT_TOKEN_TO_BE_REPLACED

I was busy working on my column for the Douglas County Sentinel, so I did not see the delivery … END_OF_DOCUMENT_TOKEN_TO_BE_REPLACED