You are here: Home / Blog / Every Now and Then / “Doing” History

Last night a group of people joined me for a talk about the Sweetwater Park Hotel and the Piedmont Chautauqua at the Douglas County library on Selman Drive.

I was amazed at the turnout. It’s great to know so many people are interested in Lithia Springs’ vibrant past.

Many showed up with articles they have collected over the years – an actual fruit bowl from the hotel, dish fragments, spoons, Bowden Lithia Springs water bottles, post card images and stories of playing on the ruins and living on the historic property as children.

Afterwards I was invited to dinner with a group who attended the talk, and they all shared more memories of Lithia Springs.

Some say I “do” history through my research and writing.

While I believe what I do has some value, the real part of “doing” history has to do with the folks who showed up last night, as well as folks who participate with my Douglas County history page on Facebook – groups of people who gather to discuss, who share, and who attempt to remember and pass those memories along.

One of the things I shared in my presentation at the library was this image from the Atlanta Constitution during the Fall of 1884. It’s an advertisement placed by John C. Bowden to lease the springs. 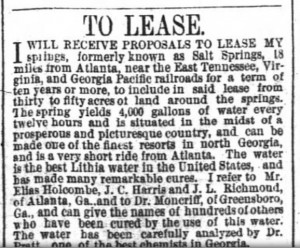 I will receive proposals to lease my springs, formally known as Salt Springs, 18 miles from Atlanta, near the East Tennessee, et al. and the Georgia Pacific Rail Road for a term of ten years or more to include in said lease from 30-50 acres of land around the springs.

The spring yields 4,000 gallons of water every twelve hours and is situated in the midst of a prosperous and picturesque  country, and can be made one of the finest resorts in North Georgia, and is a short ride from Atlanta.

The water is the best lithia water in the United States, and has made many remarkable cures. I refer to Mr. Elias Holcombe, J.C. Harris and J.L. Richmond, of Atlanta, Georgia and to Dr. Moncrief of Greensboro, Georgia and can give the names of hundreds of others who have been cured by the use of the water.

The water has been carefully analyzed by Dr. Pratt, one of the best chemists in Georgia.

The ad continued with Dr. Pratt’s analysis. The main part that stood out to me was this section per Dr. Pratt:

The rest of Bowden’s ad to lease the springs continued:

Propositions for lease must be made in writing  and submitted to me by the 15th of October next.

Bowden advised propositions could be mailed to him, and that he would be available to show interested parties around the place.  He also indicated he reserved the right to select the bid that will pay him the best income for the springs, or to reject all the bids as he saw fit.

The article went on to say, arrangements have been made to place the water on sale wherever there may be demand for it…., and during the fall and winter the water [had] been subjected to a severe test by a number of citizens of Atlanta, and that test [had] two results: 1. That the water can be transported and kept in barrels for a considerable period with no sensible deterioration of its qualities, and 2. That its effects after transportation are as remarkable as they are when drank at the spring.

There is a story that circulates that the first time the water actually came to the attention of anyone in Atlanta was via James A. Watson. He had business concerns in Atlanta, but frequently visited Douglasville to see his mother and other relatives. On one trip he fell ill and had to stay over at Bowden’s plantation home. During his stay he was given the water and credited it with his recovery. He left Bowden’s home carrying a jug of the water which he promptly had tested and shared its properties with his friend who happened to be E.W. Marsh.

So, the question I have is the Watson story merely an embellishment regarding how the springs were eventually leased and sold?  If Watson introduced Bowden to Marsh then why would Bowden need to advertise his desire to lease the springs?

I’ve had people tell me the Watson story is just some sort of historical myth, but you can’t totally discount it as “just a story” since Watson’s friend Marsh did indeed lease the springs resulting in broadening the reach Salt Springs/Lithia Springs had with the rest of the world.

Could it be Bowden wanted to see if he could get a better deal?

Was he trying to get Mr. Marsh to increase his offer?

Bowden was certainly clear in his ad that he wanted the “best” deal.

Yes, “doing” history always involves discussing, sharing, remembering and passing along what you know to others, but it also involves questions – questions that may or may not ever be answered.

Folks who “do” history, however, love to debate the possible answers.

It was a normal day at Atlanta’s Union Depot in March 1895. Dozens of horse-driven cabs were parked … END_OF_DOCUMENT_TOKEN_TO_BE_REPLACED

When I throw out the name John Wilkes Booth what comes to mind? Perhaps you think about Booth’s … END_OF_DOCUMENT_TOKEN_TO_BE_REPLACED

I was busy working on my column for the Douglas County Sentinel, so I did not see the delivery … END_OF_DOCUMENT_TOKEN_TO_BE_REPLACED