You are here: Home / Blog / Georgia On My Mind / Facing Our Enemies 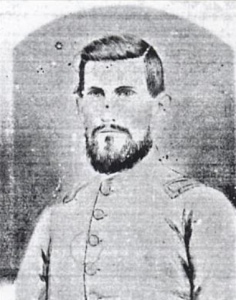 If we are really honest with ourselves we all have a few enemies.

Some are real, and some are imagined.

Some enemies are bad habits while others are thoughts and feelings, too.

Sometimes we have a collective enemy like William Ezra Curtis of Carroll County, Georgia.

His enemy happened to be the United States of America because Curtis was a solder in the Confederate Army.

The Curtis family goes way back to the earliest thoughts of Carrollton. William Ezra Curtis’ father, Henry, provided the land where Carrollton’s town square is located today. Henry Curtis was also the trustee of Carrollton’s first school, the Carrollton Academy, and served with the Inferior Court as the reviewer of roads. Today the Curtis home is the location of the Carroll County Historical Society.

At the outbreak of the Civil War, William Ezra Curtis joined the Carroll Guards, one of the first volunteer units to be organized in Carroll County. Curtis was placed in Company F of the 19th Georgia and was sent to Virginia early in the war.

By March, 1862 Curtis was appointed Lt. Colonel, and he was given the 41st Georgia Regiment to command. The group was sent to the Army of the Mississippi. Curtis was captured at Vicksburg and paroled there July, 1863.

Rather than just giving up and returning home Curtis decided to face his enemy once more and head back into the thick of battle. By this time the 41st was in Georgia, and William Ezra Curtis faced his enemy on home territory. He watched folks on the home front scatter before Sherman’s onslaught towards Atlanta.

Curtis was wounded somewhere at Mill Creek Gap on February 25, 1864. He was taken to his in-laws home near Newnan, Georgia where he died March 24, 1864.

William Ezra Curtis had one last request. He wanted to be buried facing the enemy, so that is why his is the only grave in the Carrollton City Cemetery that faces north to south rather than east to west.

The human journey through life is an interesting one full of happy moments, sad moments, moments of great success and devastating failure, but one of the most important aspects of our character, I think, has to do with facing our enemies.

Have you identified your enemies?

Devise a plan, and face them!

It was a normal day at Atlanta’s Union Depot in March 1895. Dozens of horse-driven cabs were parked … END_OF_DOCUMENT_TOKEN_TO_BE_REPLACED

When I throw out the name John Wilkes Booth what comes to mind? Perhaps you think about Booth’s … END_OF_DOCUMENT_TOKEN_TO_BE_REPLACED

I was busy working on my column for the Douglas County Sentinel, so I did not see the delivery … END_OF_DOCUMENT_TOKEN_TO_BE_REPLACED