Growing up I was huge patron of the library at our church, at my school, and the public library near my home. Occasionally, I would love a book so much I would incur a late fine or two – never a huge sum – never more than a dollar or two. Sometimes I would get a bit sidetracked and a book would get buried in a mountain of “stuff” in my room. Then I might have to pay for the book.

Things happen.  We are human, right?

Can you imagine incurring a fine amounting to over $300,000?  None of my fines ever got that high, but the same thing cannot be said of the “Father of our Country,” our first U.S. President, George Washington.

In 2010 reports began to circulate that it had been discovered George Washington had died without ever returning two library books he had borrowed from the New York Society Library. The same reports mentioned that the accrued library fines which had been mounting since November 1789 amounted to $300,000!

The first thing that comes to mind is how did George Washington, a citizen of Virginia, come to have two books checked-out from the New York Society Library?

Where had the books been all this time?  Were they languishing on some book shelf at Mount Vernon or lost across some Revolutionary War battlefield?

This painting of George Washington, often referred to as the “Lansdowne” portrait was painted by Gilbert Stuart in 1796 and hangs in the National Portrait Gallery at the Smithsonian in Washington, D.C.  I see a couple of books on the table.  Could these be the missing volumes?  Were they used as a prop in the painting? 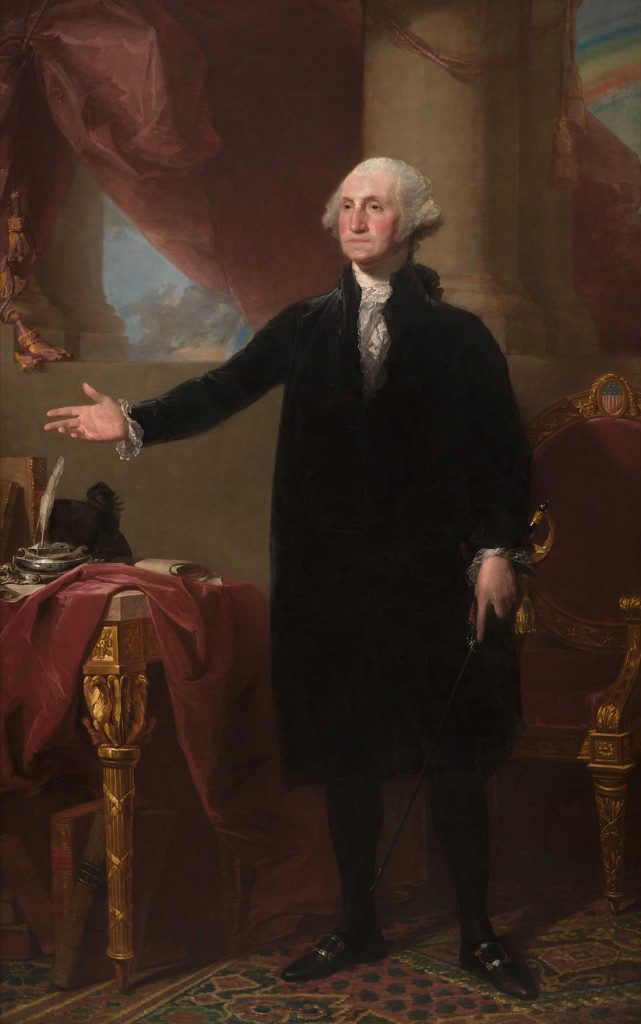 Today, Washington’s home, Mount Vernon is owned and maintained in trust by the Mount Vernon Ladies’ Association.  News reports at the time stated the New York Society Library was not interested in making them pay the fines, but they did want to see if the books could be found and returned.

Unfortunately, it would not be as simple as going to a shelf at Mount Vernon and locating the books. A bit of historical sleuthing would have to be done.

In 1789, the government of the United States was in New York City at Federal Hall on Wall Street. The building housed Congress as well as the office of the President but was demolished in 1812.

Federal Hall was also home to The New York Society Library, the oldest library in New York today. Their webpage advises it served as the first Library of Congress since it was used by members of Congress and the Cabinet including men such as Aaron Burr, Alexander Hamilton, and John Jay.

In 2010 records were found that indicated President George Washington borrowed two books from the library on October 5, 1789 – five months after being sworn in as President of the United States.

One volume was titled Law of Nations by Emerich de Vattel described as a dissertation on international relations. Published in 1758, the book was extremely popular with many of the Founding Fathers including Benjamin Franklin. Upon receiving three original copies of the book Franklin wrote in a thank you note, “[The book] came to us in good season, when the circumstances of a rising State make it necessary to frequently consult the Law of Nations.” 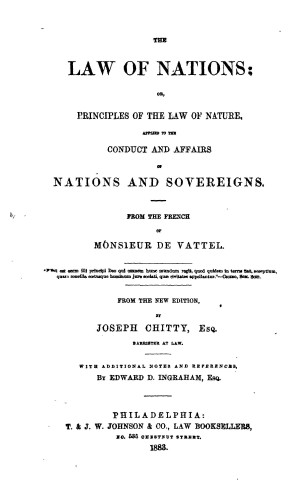 The second book was Volume 12 from the British House of Commons Debates also known as The Debates or as Hansards. This was a set of 14 volumes regarding what was said in Parliament – equivalent to our Congressional Record.

At any rate the books weren’t exactly light reading, but it is understandable President Washington would want to consult those books since historical sources indicate Washington was getting ready to tackle some diplomacy issues with Great Britain that Fall, and his diary indicates a meeting with Chief Justice John Jay and his Treasury Secretary Alexander Hamilton on October 7, 1789 – just two days after checking out the books.

The library ledger does not contain the President’s signature and does not indicate if he checked the books out himself or if an assistant did it for him. Someone did write the word “President” next to the title entries.

The books were both due one month later, but they probably were not on President Washington’s mind. He had left New York on October 15, 1789 for a tour of New England.

So, did the library send out notices for the late books to Washington? I never found any mention, if they did, but articles at the time advise the ledger where President Washington or his assistant checked out the books was retired in April 1792 and a new leather-bound ledger was begun.  At some point the records showing which books had been checked out during the late 1770s and early 1780s went missing, so that can explain why the library never chased President Washington down for the books.

President Washington returned from his New England tour and other things began to fill his mind such as the Whiskey Rebellion, planning a new national capitol along the Potomac River, and then there was the matter of returning to Mount Vernon and getting settled into private life. I hardly think he had time to worry about two books.

Getting back to the missing library ledger…

In 1934, 142 years later, the ledger was found in a pile of trash at the library.  Apparently, it had survived four moves since 1792, and finally made itself known at 109 University Place in Manhattan, the library’s current home.

The library conducted an inventory of books mentioned in the ledger and confirmed the books  President Washington or an assistant checked-out were still missing from the library’s inventory. The situation was a closely held library secret until 2010 when The New York Daily News reported it.

In today’s instant news world full of leakers, I cannot even imagine a secret being held for that long. Can you?

Once the staff at Mount Vernon heard the news, they instantly began to search for the books, but were unable to locate them.

Considering how President Washington’s books had been scattered over the years, I am not surprised. At the time of his death in 1799 Washington’s personal library contained over 900 volumes.  His nephew, Associate Justice Bushrod Washington of the Supreme Court, inherited the President’s papers, his home, and of course, his books.

In 1847, many of the books that remained were sold to a bookseller by the name of Henry Stevens. His goal was to send the books to the British Museum.

Just entertaining the idea that the British Museum would be the recipient of George Washington’s belongings is outrageous, right?

A group quickly raised a little over $4,000 and saved the books. They were purchased for the Boston Athenaeum – one of the oldest independent libraries operating in the United States. Even today members pay an annual subscription fee to use the library’s resources.

The collection housed at the Boston Athenaeum is all we have of the original 900 volume library since other books owned by the President were sold at auction in 1876 and again in the 1890s.

Getting back to George Washington’s overdue library books…

The folks at Mount Vernon finally inquired with rare book sellers and searched the Internet and found a copy of Law of Nations and purchased it for $12,000.

The Law of Nations was finally returned to The New York Society Library on May 20, 2010 during a ceremony where James Rees, executive director of Washington’s Mount Vernon Estate, told library staff, “We express gratitude for your patience…and for your generosity in erasing the considerable funds that were probably owed by George Washington. He did not do his public duty.”

Public duty?  President Washington may not have even known about the books, and it would seem to me that George Washington’s photo would be in any dictionary alongside the entry for “duty” due to his service during the Revolution and as the first U.S. President. That being said it is still important to return our library books!

The last time I checked there was no news on the missing Hansard volume. Perhaps the New York Society Library decided to let the matter rest once they received one of the books.

If you enjoyed this post you might like my latest book – Georgia on My Mind: True Tales from Around the State which contains 30 true tales from all around the state including three stories from Atlanta, and yes, there will be volume two out soon! You can purchase the book here…in print and Kindle versions.

Full disclosure…this web article first appeared at the U.S. President’s Blog in December 2010 where I was invited to post about all things presidential from time to time.  The blog is no longer available online, but may come up in web searches.