When I was a little girl one of our Thanksgiving traditions was to decorate our Christmas tree. Dear Mother balked at first, but Dear Sister and I argued that the Rich’s Great Tree was lit on Thanksgiving evening, so why shouldn’t the Land family tree follow suit.

Faced with that logic Dear Mother relented. I realized after I had children what an extra burden we placed on her. She not only had the entire Thanksgiving dinner to prepare, she also had to find a tree – an artificial tree was unheard of in those days – as well as get it home. Then she would have to ask Dear Daddy several times before he would finally trim the bottom of the tree and nail two boards crosswise to serve as a makeshift stand.

At any rate Christmas tree decorating at Thanksgiving has been a Land family tradition for many years.

This past Friday afternoon found me “all-in”, committed to the hilt, as I began to drag out the various containers where we store our Christmas memories.

As I began placing each memory on our family’s tree my mind wandered to the long history of Christmas trees. Historians trace the use of Christmas trees to the 15th or 16th century in Germany – a custom that finally went beyond German borders as they began to immigrate to other countries.

There are many towns in the United States that make the claim to have had the first Christmas tree, but many sources relate how the Hessian soldiers had a Christmas tree or two during the American Revolution.

The first tree in Georgia is credited to the city of Elberton and was introduced by the George Loehr family. 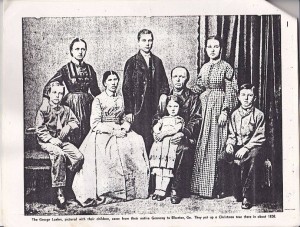 George Loehr was born in Einbeck, Germany. He served in the German army for three years and learned the trade of cabinet making before coming to the United States in 1848. He arrived in Elberton in 1850.

A 1958 article that appeared in the Atlanta Journal and Constitution magazine titled “Did They Have the First Christmas Tree?” interviews a couple of Mr. Loehr’s grandchildren who remembered their home was the only house in Elberton to have a Christmas tree. The next year the tradition was copied by many of their neighbors, and it grew from there.

Mr. and Mrs. Loehr “made paper chains and streamers, fashioned other ornaments, [and] added strings of snowy-white popcorn.” Candles were fastened to the limbs of the tree

Mr. Loehr created wooden toys that were placed around the tree along with a “dainty picket fence – which he painted white – to surround [the tree]. The fence added to the beauty of the scene, and it kept the starry-eyed youngsters at a distance when they gazed at the beautiful creation in amazement, but were safe from the burning candles.”

The wooden toys were stored each year and brought out to place under the tree each Christmas.

The Loehr home at 305 Heard Street, just south of Elberton’s town square, still stands and is known as the Christmas tree house. 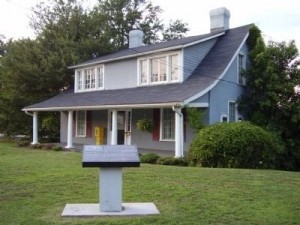 It was a normal day at Atlanta’s Union Depot in March 1895. Dozens of horse-driven cabs were parked … END_OF_DOCUMENT_TOKEN_TO_BE_REPLACED

When I throw out the name John Wilkes Booth what comes to mind? Perhaps you think about Booth’s … END_OF_DOCUMENT_TOKEN_TO_BE_REPLACED

I was busy working on my column for the Douglas County Sentinel, so I did not see the delivery … END_OF_DOCUMENT_TOKEN_TO_BE_REPLACED