You are here: Home / Blog / History Is Elementary / Getting to the Tooth of the Matter 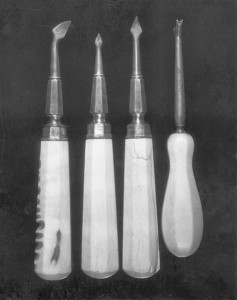 Do you know what these are?

If you guessed dental tools you would be correct.

Now, who owned them?

None other than America’s silversmith and favorite member of the Sons of Liberty who rode the countryside warning the folks that the British were coming.

No – not William Dawes, but that other one. Yes, old what’s his name?

Following the French and Indian War the economy in the colonies had been what is described by some today as an economic downturn.

Actually, folks were really hurting financially. Not only did the colonies take a hit with the French and Indian War – there was something called the Stamp Act that severely impacted Paul Revere’s business.

With creditors after his property and no orders coming in for his metal working, Revere turned towards dentistry.

A surgeon staying with a mutual friend taught Revere some of the tricks of the trade.

“Paul Revere, Takes this Method ‘of returning his most sincere Thanks to the Gentlemen and Ladies who have employed him in the care of their Teeth, he would now inform them and all others, who are so unfortunate as to lose their Teeth by accident or otherways, that he still continues the Business of a Dentist, and flatters himself that from the Experience he has had these Two Years (in which Time he has fixt some Hundreds of Teeth) that he can fix them as well as any Surgeon-Dentist who ever came from London, he fixes them in such a Manner that they are not only an Ornament, but of real Use in Speaking and Eating: He cleanses the Teeth and will wait on any Gentleman or Lady at their Lodgings, he may be spoke with at his Shop opposite Dr. Clark’s at the North End, where the Gold and Silversmith’s business is carried on in all its Branches.”

Revere made his dentures from walrus ivory.

Now, I know what you are thinking.

No, as far as I know Revere never crafted a set of dentures for George Washington.

As history and Trumbull’s iconic painting of the Battle of Bunker (Breed’s) Hill explains Dr. Warren, another member of the Sons of Liberty died a tragic death.

Amazingly, Paul Revere was the one who was able to identify Warren’s body nine months after the battle because he recognized a tooth he had replaced in Dr. Warren’s dental work.

Don’t you love the twists and turns of history?