You are here: Home / Blog / History Is Elementary / The Know Nothings and the Washington Monument

How do you like this picture of the Washington Monument? 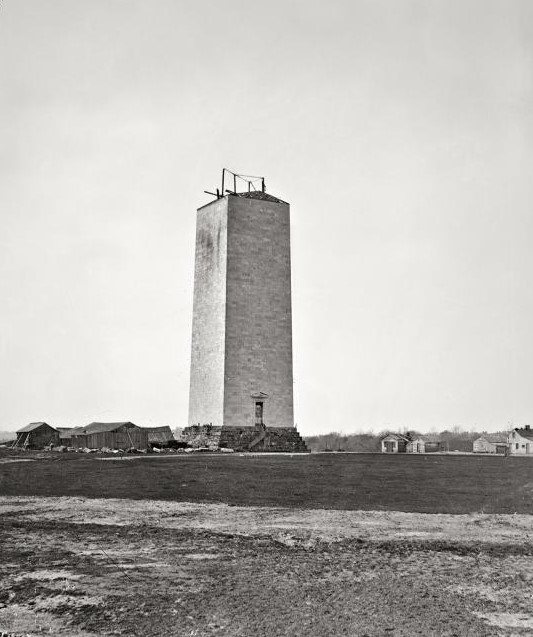 Yes, I know.  It doesn’t look right, does it?  At the point this picture was taken the construction had been suspended. In fact, the monument sat for 25 years with no action whatsoever.

Of course, knowing that the above picture was taken in 1860 it would be very easy to surmise construction stopped because of the Civil War…and to a point, you would be right, but the war isn’t the only reason why construction stopped. Work was suspended around 1854, six years prior to the first shot fired at Fort Sumter, so there had to be another reason for the suspension.

It had something to do with those durned Know Nothings.

I’ve written about them before way back in 2006 when I told my students Millard Fillmore was a Know Nothing.

Back then I advised Fillmore accepted the 1856 presidential nomination for the Know Nothing or American Party. They were a nativist group that feared Catholics would gain too much control of state and local governments and opposed their immigration. Know Nothings wanted to use the government to push their agenda regarding a Protestant Anglo-Saxon society. They called for limits on immigration, wanted to limit political office to native-born Americans only, and called for a twenty-one year wait for immigrants to become citizens. Other extreme desires of the Know Nothings were a limit on the sale of liquor, and to have their version of the Bible read in American classrooms.

The name Know Nothing derives from the fact that when party members were asked about the group’s activities, they were supposed to reply, “I know nothing.”

When the first idea was hatched concerning the Washington Monument a society was formed as early as 1832 to oversee the design and construction named The Washington National Monument Society.

A design contest was held which Robert Mills won. The image below was his original design. 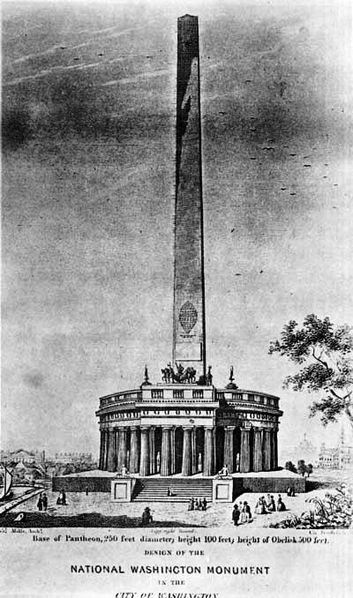 Yes, the original design was altered along the way.

In 1849, funds had begun to dwindle. The Society began the commemorative stone program where states could donate engraved stones that would be installed in the interior of the monument. The program got a little out of the hand as more folks got involved.

The purpose of the program was to help all Americans feel a part of the memorial, and more importantly to the society, the stone donation program would cut the cost regarding the number of stones that had to be purchased.

Stone began arriving from states as well as other territories, foreign nations, fraternal organizations, societies, businesses and even a couple of American Indian tribes. While a few stones were delivered with a donation towards the construction, many did not.

Some of the stones came with inscriptions that didn’t have anything to do with President Washington. The Templars of Honor and Temperance sent a stone that said, “We will not buy, sell, or use as a beverage any spirituous or malt liquors, wine, cider, or any other alcoholic liquor.”

The Know Nothings gained control of the Society in 1855 and kept things in turmoil. Basically, they took control of the records and started their own organization, of sorts. Work slowed down to a crawl with only four feet being added to the monument over the next three years. Eventually, the work stopped.

The Know Nothings also objected severely to one of the donated commemorative stones. Pope Pius IX donated a stone taken from the Temple of Concord in Rome and had it inscribed “Rome to America”. Of course, the Know Nothings weren’t happy about the stone due to their anti-Catholic feelings.

Supposedly, a group of Know Nothings stole the stone, smashed it to bits, and threw the pieces into the Potomac River.

The Washington Sentinel from March 8, 1854 advised the block was mutilated beyond recognition before being thrown into the river. In the days that followed souvenir hunters fanned out across the banks of the river looking for fragments.

In 1858, the Know Nothings gave up their control of the Society, and finally in 1876, President Ulysses S. Grant signed an act that gave control of the Washington Monument to the U.S government. The Society would still solicit funds and provide advice regarding construction. Once government funding was in place the monument was finished with a few modifications to the original design.

So, is the Pope’s stone still at the bottom of the Potomac River?

A Washington Post article from June, 1892 advises a large stone….sharply cut and beautifully polished was found near the southwest corner of the abutment for the Long Bridge over the Potomac River during a period of construction. The stone had marks on it that might have come from a hammer, and an inscription on one side had been partially knocked off in several places. Just enough remained, however, to make out “RO – MERICA” cut deep in Gothic letters.

In fact, the Smithsonian boasts a piece of the Pope’s stone they received as a donation in 1972. The woman who donated it claimed she had held onto the stone for over 60 years. Her brother gave her the stone via one of the supposed original thieves.

As far as I can tell the rowdy members of the Know Nothings responsible for the theft were never found, but a new Pope’s Stone was commissioned by a priest in Spokane, Washington and installed in the monument by the National Park Service in 1982.

For more on the various inscribed stones used in the Washington Monument’s construction you can read my post here and view several pictures.