You are here: Home / Blog / History Is Elementary / A Little Pin Money 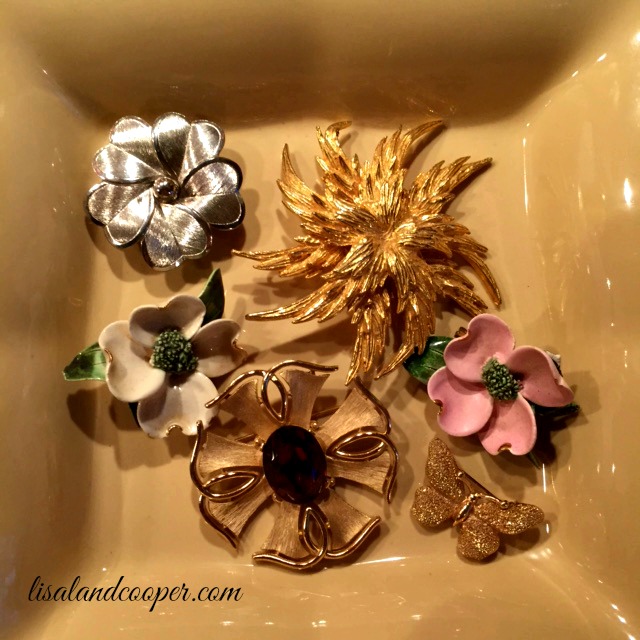 Sometimes all a woman needs to complete an outfit is a carefully selected pin.

My mother had several. I’ve pictured a few of them here.

Your mom probably had several as well.

It is believed that English women began wearing pins after they were introduced by Catherine Howard, one the many wives of King Henry VIII, and as most fashion trends usually begin, Queen Catherine borrowed the custom from the French. In the beginning much like any hot item pins were very expensive, and many women began to receive extra money over and above the normal sum given to them to run the household so that their pins could be purchased.

The term “pin money” was born.

The practice was so popular men began including provisions for pin money in their wills even though it was not a common practice to leave a woman something outright unless it was controlled by a man.

The Testamenta Eboracensia—a selection of wills from the Registry of York, 1542 includes this selection from one will, “I give my said doughter Margarett my lease of the parsonadge of Kirkdall Churche…to by her pynnes withal.”

Eventually the price of pins came down, more ladies could afford them, and the original purpose of pin money changed to include any extra little luxury or treat a lady might want to purchase.

Fast-forward to 1912 and the will of Henry G. Freeman, Jr. made provisions for pin money—pin money for the First Lady to be exact. Mr. Freeman, a wealthy real estate investor from Philadelphia, felt that the salary of the U.S. President ($75,000 at that time) was not large enough to provide for extras. The will set up a trust that would provide the sum of $12,000 for the first lady’s “own and absolute use” and the payments “shall continue in force as long as this glorious government exists.” The distribution of the money would not begin until Mr. Freeman’s last heir had passed away.

Seventy-seven years would go by before there would be any distribution from the Robert J. Freeman Trust. Many a First Lady would live in the White House and NOT benefit from the pin money during that time.

During the administration of Georgia H.W. Bush the last Freeman heir passed away and the trust fund become active in November, 1989. An article at the time by John Yang from MSNBC mentions the fund and how it has been spent. First Lady Barbara Bush donated a portion of the money to charity and also used it for “something nice” for the grandchildren.

First Lady Hillary Clinton and First Lady Laura Bush also have benefit from the fund, however they have both disclosed they donated the entire amount to charity which is a great tax write off since the money is taxable.

First Lady Michelle Obama has not been able to enjoy the stipend due to a Pennsylvania law that governs perpetuities and caused the whole Freeman gift to come into question. To finally end the confusion  the current First Lady released her claim to the money and directed the Freeman trustees to pay the money to charities mentioned in Freeman’s will.

W.B. Freeman wanted to provide the First Lady with a little stipend to honor her for the work she does. Who knew laws would change and a supposed gift would end up being more trouble than it was worth?

I would enjoy the small annoyance a $12,000 gift could cause in order to pick up a few baubles, wouldn’t you?

It was a normal day at Atlanta’s Union Depot in March 1895. Dozens of horse-driven cabs were parked … END_OF_DOCUMENT_TOKEN_TO_BE_REPLACED

When I throw out the name John Wilkes Booth what comes to mind? Perhaps you think about Booth’s … END_OF_DOCUMENT_TOKEN_TO_BE_REPLACED

I was busy working on my column for the Douglas County Sentinel, so I did not see the delivery … END_OF_DOCUMENT_TOKEN_TO_BE_REPLACED