You are here: Home / Blog / History Is Elementary / Lucy Lambert Hale and the President’s Assassin

When I throw out the name John Wilkes Booth what comes to mind?

Perhaps you think about Booth’s responsibility in ending President Lincoln’s hopes for a kinder Reconstruction. Maybe the words assassin, actor, murderer, or Confederate sympathizer come to mind. If you are a real student of Booth’s role in our nation’s history you know Booth was a member of the anti-immigration Know Nothing party, he was finally located in a barn but actually died on a porch, and maybe you even know he was thought of as one of the handsomest men in America in the 1860s which leads us in the direction I’m heading today.

What about the romantic Booth?  Did anyone ever capture his heart? He was known as a notorious lady’s man, but someone most certainly captured his heart.

In 1864, he exchanged photos and letters with 16-year-old Isabel Sumner from Boston, Massachusetts. He gave Isabel a ring, set with a pearl, which was inscribed “J.W.B. to I.S.” When Booth was sick in New York Isabel sent him flowers. It seems the romance was short-lived, and there is no evidence it lasted beyond the summer of 1864.

Sometime in late 1864 or early 1865, Booth began a serious romance with Lucy Lambert Hale, daughter of John Parker Hale, a Senator with abolitionist leanings from New Hampshire. Senator Hale had begun his political career in the U.S. House of Representatives in 1843 beginning his career as a Democrat but helped establish the anti-slavery Free Soil Party and eventually joined the Republican Party.

Lucy Lambert Hale, pictured below, was seen at many parties, dances, and social functions and was one of the belles of Washington society. She had been pursued by several men including Oliver Wendell Holmes. It is believed Booth began pursuing Lucy as early as Valentine’s Day 1862 sending her anonymous notes. The Valentine’s Day note said:

My dear Miss Hale, were it not for the License with a time-honored observance of this day allows, I had not written you this poor note. … You resemble in a most remarkable degree a lady, very dear to me, now dead and your close resemblance to her surprised me the first time I saw you. This must be my apology for any apparent rudeness noticeable. To see you has indeed afforded me a melancholy pleasure, if you can conceive of such, and should we never meet nor I see you again believe me, I shall always associate you in my memory, with her, who was very beautiful, and whose face, like your own I trust, was a faithful index of gentleness and amiability. With a Thousand kind wishes for your future happiness I am, to you,

Lucy and Booth’s paths might have crossed as early as January 1865 when they both found themselves residing at the National Hotel which was located on the northeastern corner of the intersection of Pennsylvania Avenue and 6th Street, N.W. in Washington, D.C. The hotel was built by John Gadsby in 1826 and numerous members of Congress, other U.S. government officials, and visitors from all over the world stayed there while in the nation’s capital. Eventually the hotel was sold to the city in 1929 and demolished in 1942.

During the Civil War, the National Hotel also had a reputation as a meeting spot for Confederate sympathizers such as John Wilkes Booth.

Lucy’s father was working hard to persuade President Lincoln to appoint him as minister to Spain as well as securing a match between his daughter and Robert Todd Lincoln, President Lincoln’s son. Fate intervened because Lucy eventually discovered her anonymous admirer was John Wilkes Booth, and they began “keeping company” without her father’s knowledge or consent.

By March, it is said that the lovebirds were secretly engaged, they were often seen together in the National Hotel lobby, and there were reports they had been seen kissing and touching which was quite scandalous behavior for the time period, so it’s no wonder Lucy’s father denied any connection between his daughter and Booth when questioned. It is thought John Wilkes Booth sought the relationship with Lucy because she could give him access to many government movers and shakers.

You may have seen the famous photo, seen below, of President Lincoln’s second inauguration on March 4, 1864 where John Wilkes Booth is in the audience. He can be seen on the top row, right of center.  What many do not know is Booth attended the inauguration as the invited guest of Lucy Lambert Hale who had obtained the tickets from her father’s office. Many historical sources quote Booth’s good friend, Samuel Knapp Chester relating that Booth said of the ceremony, “What an excellent chance I had to kill the President, if I had wished, on inauguration day!” 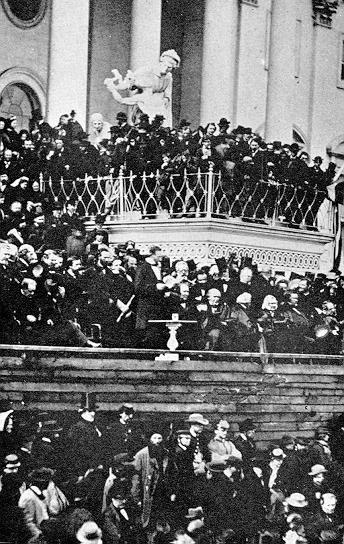 On March 17th, Booth’s mother wrote to her son:

The secret you have told me is not exactly a secret as Edwin [Booth’s brother] was told by someone, you were paying great attention to a young lady in Washington, and if the lady in question is all you desire- I see no cause why you should not try to secure her. … Her father … would he give his consent?

We now know that by this time Booth was heavily involved in his plan to kidnap President Lincoln which ultimately failed and morphed into the assassination plot.

Senator Hale’s work paid off and President Lincoln did appoint him to the position of American Ambassador to Spain. It was perfect timing as Hale had recently lost his long-held Senate seat, and he hoped the move would end his daughter’s relationship with the actor Booth.  Many detailed histories of the events leading up to the assassination of Lincoln state that Lucy Hale and John Wilkes Booth were seen in conversation at the National Hotel at the same time her father was meeting with the President. It was that very night that President Lincoln attended the performance of “My American Cousin” at Ford’s Theater, and Booth carried out his assassination plot. Other historians point to the fact that Lucy and Booth had begun to quarrel especially after he saw Lucy dancing with Robert Todd Lincoln at some point, and that she may have never been aware of Booth’s hatred towards President Lincoln.

We do know that on the afternoon of April 14, 1865, the day President Lincoln was assassinated, Lucy supposedly spent the afternoon studying Spanish with Robert Lincoln, and another former admirer, John Hay, President Lincoln’s assistant private secretary.  Many later saw Lucy and her mother having dinner that night with Booth. He left them at 8 p.m and visited a saloon before entering the President’s box at Ford’s Theater around 10:14 p.m.

After shooting President Lincoln, Booth jumped to the stage shouting “Sic semper tyrannis” breaking his leg along the way. Still, Booth was able to get away from the theater. When he was finally apprehended and killed on April 26, 1865, he had a copy of Lucy’s picture I shared above in his chest pocket.

Lucy Lambert Hale spent the next five years with her father in Spain. She was never questioned regarding her relationship with John Wilkes Booth regarding who she might have seen him meet with or what he might have told her regarding the plan to assassinate President Lincoln. She eventually married William Chandler who like her father also served as a New Hampshire Senator.