You are here: Home / Blog / Georgia On My Mind / President Wilson’s Other Wife

Ask many people about President Woodrow Wilson’s wife and they might tell you things like, “Oh, she’s the one that took over the White House after Wilson’s stroke.”

Yes, some historians refer to the period immediately following Wilson’s stroke in 1919 as the Petticoat Government since Edith Wilson did curtail prying eyes from viewing the stricken president. The First Lady did not allow any visitor or document to reach President Wilson without her approval. She managed to hold off everyone long enough for Wilson to somewhat recover. However, what we need to remember here is Edith Wilson was the President’s second wife.

Isn’t this a lovely work of art? 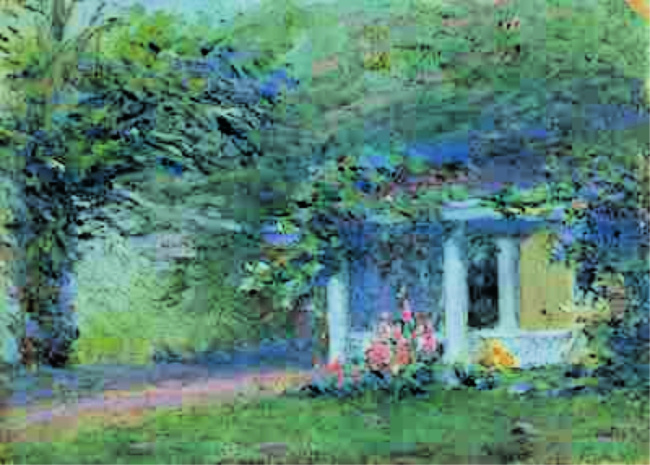 The title of this painting is Side Porch, Griswold House. It is dated 1910 and the artist is Ellen Axson Wilson, the first wife of President Woodrow Wilson.

The first Mrs. Wilson was born in Savannah, Georgia in 1860, the daughter of a Presbyterian minister. Most of her life was spent in Rome, Georgia while President Wilson spent most of his boyhood living in Augusta, Georgia, also the child of a minister. It is interesting to note that for approximately one year in the early 1880s the Wilson’s lived in Atlanta where President Wilson had a law office in the Concordia Building at the corner of Marietta and Forsyth Streets. The building was torn down in the 1960s to make way for the First Federal Savings and Loan building.

Mrs. Wilson studied art at the Art Students’ League in New York. The New Georgia Encyclopedia advises she created crayon portraits from photographs and sold them. She often put her art pursuits on hold to run her household, attend to her three daughters, and to be available for her husband as he progressed through academic ranks to finally become president of Princeton in 1902.

In 1905, Mrs. Wilson returned earnestly to her art when her brother, his wife, and their son drowned in a Georgia river. She created a scholarship at Berry College in memory of her brother and sold various paintings to fund it. It was during this time that Mrs. Wilson did her most serious painting. She, along with President Wilson and their daughters, began to spend their summers in Connecticut at the boarding house of Francis Griswold.

Many Impressionist artists such as Childe Hassam and Frank DuMond stayed with Mrs. Griswold as well, and this community of painters became known as the Old Lyme Art Colony. Today the Florence Griswold home is a museum. Many of Wilson’s paintings bear only the initials E.W. as she did not want to overshadow her husband’s career in any way, however, her works often appeared in one-woman shows, she won awards, and some of her artwork was displayed at the Chicago Art Institute.

It would appear from his correspondence that President Wilson enjoyed the trips to Old Lyme as much as his wife. In his article Woodrow Wilson, A Lighter Side Edmund T. Delaney quotes Wilson from correspondence dating back to 1909 where Wilson advises, “Lyme is one of the most stately and old fashioned of New England villages, and we shall be boarding not with New Englanders, who get on my nerves, but with a jolly irresponsible lot of artists, natives of Bohemia, who have about cleared the air of the broad free world . . . Lyme is a delightful haven in which to sleep, sleep interminably, as I love to do, when I am worn out.”

Unfortunately, the trips to Connecticut stopped for the Wilsons once Woodrow Wilson was elected governor of New Jersey. He noted, “If we take a house by the sea, it must be in Old New Jersey, which would not forgive us if we went elsewhere”. Thus, the family opted to forgo the seashore and settled for the hills of Cornish on the New Hampshire side of the Connecticut River.

Once the Wilson’s reached the White House Ellen Wilson did not give up her art pursuits. She had a studio with a skylight installed in 1913. Many of her biographers quote White House staff members fondly remembering her as calm, sweet, motherly, pretty, and refined.

Mrs. Wilson pursued more than just her art as First Lady, however. She worked for the poor in an attempt to clean up the slums of Washington D.C., she organized the White House Rose Garden, and besides the regular round of official duties and dinners she also arranged for the White House wedding for not one daughter but two.

Unfortunately, Ellen Axson Wilson died seventeen months into Woodrow Wilson’s presidency from Bright’s Disease. Currently she is the only First Lady buried in Georgia. She lies next to her parents at Myrtle Hill Cemetery in Rome, Georgia.

You can find out more about Ellen Axson Wilson’s time in Old Lyme here within an online exhibit from the Florence Griswold Museum.

It was a normal day at Atlanta’s Union Depot in March 1895. Dozens of horse-driven cabs were parked … END_OF_DOCUMENT_TOKEN_TO_BE_REPLACED