You are here: Home / Blog / Every Now and Then / The Story Behind Atlanta West-Parkway General Hospital

This post is an excerpt from my soon to be published book, “Every Now and Then: The Amazing Stories of Douglas County, Georgia”!

Growing up my sister and I looked for certain landmarks as we traveled the Atlanta expressways with our parents. If we were heading north up Interstate 85 I would attempt to locate the twin Gwinnett water towers before Dear Sister. If we were heading west on Interstate 20 we would look for the iconic round hospital tower at Thornton Road.

Sadly, the landmark is no longer there….a victim to the wrecking ball, but the hospital does have an interesting history and came about as the brainchild of one Douglas County couple.

Glenmore and Sarah Carter spent thirty-eight years in the ministry of the Seventh Day Adventist Church. They lived along with their two sons, Lee Edwin and Glenn Thomas, in places such as India.

Sometimes their assignments were in dangerous and near-dangerous situations.

The Southwestern Union Record, a Seventh Day Adventist newsletter, dated September 4, 1935 mentions the Carters. The article states, “A letter just received by Mr. and Mrs. L.N. Carter from their son Glenmore brings the news that because of the Suez situation being so serious word was received from Washington for them not to sail from New York via Europe. It also advised that the missionaries in Addis Ababa have been ordered to leave. This without doubt bespeaks of the seriousness of things in the east Mediterranean. Glenmore Carter and family will now sail from Seattle, Washington September 13, 1935.”

In her book titled The Vansant Family Tree: Branch of Sarah Elizabeth (Vansant-Woods) Carter Ancestors and Descendants, Mrs. Carter advises, “There came a time when these sons reached college and their bills were more than our salaries, so I did special duty nursing and we always had the bills paid at the end of the school year. One dollar per hour was the pay for the special duty nursing in those days.”

An issue of The Record, a Seventh Day Adventist newsletter from 1956 indicates Glenmore Carter was the pastor of Houston Central Church and the announcement was being made regarding the purchase of property for a new church and school facility. The church – with a membership of 600 – had outgrown its building.

By 1963, the Carters were in Little Rock, Arkansas where Glenmore had become a regular on local television appearing on various religious shows.

Mrs Carter advises, “After retirement I thought it was my turn to suggest where we would live. That ended with our going back to the county where the old Dog River flowed. But retirement was not for us.”

In the 1960s along with 42 other Adventist the Carters bought the old church used by the Methodist in the center of Douglasville – at the corner of Price and Church Streets (where the city parking lot stands today) – with the handsome stained-glass memorial windows and organized a new Adventist church there.

Mrs. Carter advises, “We saw the need for medical and hospital work in that county on the edge of booming Atlanta. We saw the plans for the big new freeway, Interstate 20, to be built right by us, so invested in 500 acres of land and this paid off. We used the gain to put up a lovely nursing home, The Georgian Villa, on a beautiful lake. Then we built a school, and last of all a 400 bed ultra modern hospital, Atlanta West Hospital, just twelve miles west of Atlanta, right on I-20. It was a dream come true when I had the privilege of planning a modern hospital with every nook and corner designed for the best in nursing care.” 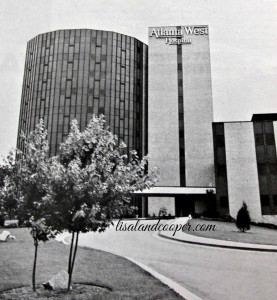 In 1973, projections to build the 11-story cylindrical nursing tower with an attached rectangular medical building stood at 17million dollars, however later editions of the Seventh Day Adventist newsletter advised the final cost was closer to 27 million dollars.

The hospital was funded through bonds.

Mrs. Carter advises in her book constructon was very successful, and the hospital opened on time, but “the administration we had chosen failed us and quickly wasted over a million dollars in opening reserve.”

Fanny Mae Davis remembers the early days of the hospital in this way, “The advanced architectural design was matched by a far-sighted approach to equipment inside the hospital. Unfortunately, low utilization of the facility resulted in financial problems.”

Mrs. Davis continues,”The hospital operated efficiently, but lack of operating funds forced the founders deep in debt and finally, the hospital faced bankruptcy. In 1976, a class action suit was filed against Atlanta West, its corporation and officers, the bond trustee bank, the bonding company [The First Dayton Corporation, Dayton, Ohio], and others. The case hung in Court for six years, but finally came to trial in federal court in Ohio in December, 1981. The Carters relinquished legal responsibility three and half months before the bonds went into default, but never hesitated to enter the court and acting as their own attorney, defended every charge. After a lengthy trial, the federal court jury gave a clear verdict on every point, favoring the Carters and the hospital corporation. Their defense was complete and decisive, and it was said to have helped save millions for the bond holders, who ultimately received their full original investment and considerable interest.”

The Hospital Corporation of America ended up purchasing the hospital, and eventually it was one of the best operated hospitals in America.

My research indicates they purchased the hospital for 22 million dollars.

An article from the Douglas County Sentinel notes “real stability happened in 1980 when the Hospital Corporation of America bought the hospital and changed its name to Parkway Regional.” The Georgian Villa nursing home was also part of the purchase and its name was changed to Garden Terrace. One important first for the original Georgia Villa was it was the first facility of its kind in the nation to receive a Medicare check for nursing home care.

Parkway Regional eventually met its demise due to the swing of a wrecking ball in 2004. I’m told the recyclable steel was sold and shipped to China for their building boom. Today a Home Depot store sits on the spot where the hospital once served as a unique landmark along the expressway.

In 2008, the nursing home changed names again to Douglasville Nursing and Rehabilitation.

The Carters finally took that retirement…

Mrs. Carter advises, “There comes a day when retirement becomes a reality. We thought it would be wonderful to be up in the mountains of Tenneessee near the Smokies and figured that was the answer. It was beautiful and relaxing, looking out over the hills and mountains. But one thing we did not take into consideration, the legs that had been faithful for over seventy years now did not desire to carry up the hills. On icy winter days we did not always go in the right direction. So in 1981 we moved to Texas, level and plenty of heat to care for arthritis. After six years back home in the college town of Keene, where Glenmore grew up, we are doing grand. At present, (1986) we travel for our hobby and thoroughly enjoy taking life a bit easier.

Glenmore passed away in 1996 while Sarah reached the age of 98 before passing away in 2007.

It was a normal day at Atlanta’s Union Depot in March 1895. Dozens of horse-driven cabs were parked … END_OF_DOCUMENT_TOKEN_TO_BE_REPLACED

When I throw out the name John Wilkes Booth what comes to mind? Perhaps you think about Booth’s … END_OF_DOCUMENT_TOKEN_TO_BE_REPLACED

I was busy working on my column for the Douglas County Sentinel, so I did not see the delivery … END_OF_DOCUMENT_TOKEN_TO_BE_REPLACED