You are here: Home / Blog / Every Now and Then / Twelve Cars of Chinese

Those who were at the depot Sunday afternoon [September 28th] saw the sight of a lifetime. A solid train of twelve chairs of the Southern Pacific railroad was loaded with Chinese, numbering 365, from San Francisco to Cuba, where they will be employed in the sugar industry. This shipment is said to be the first one of 3,000 Chinese who will be sent forward as fast as transportation can be procured for them. The train was heavily guarded to prevent escape of any of the Celestials, while en route to their destination.

This article appeared in the Douglas County Sentinel dated October 1, 1920.

I don’t think I’d be far off the mark if I mentioned you could probably count the folks on one hand in Douglas County who had actually seen a Chinese person at that time, so seeing 365 men peering out the windows of a train would have been a memorable event.

Chinese immigration to Cuba began in the late 1880s as Cuba abolished slavery. Suddenly, they needed a source of cheap labor, and China was at the top of the list. 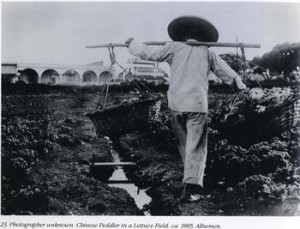 Many Chinese were willing to leave their county – a place that had been torn apart during the Opium Wars, but it is true that others were placed in what resulted to nothing more than semi-indentured servitude. Almost all of the Chinese who arrived in Cuba were men. They lived in poverty and were severely disadvantaged.

According to Margarita Cervantes-Rodriguez in her book International Migration in Cuba: Accumulation, Imperial Designs and Transnational Social Fields, “The most impressive growth of the Chinese population [in Cuba] in the 20th century took place in the 1920s.”

Hence the train with 365 Chinese traveling through Douglasville, Georgia.

The 1920s is the period when Havana’s Chinatown emerged as an economically vibrant and culturally picturesque neighborhood of the area called Centro Habana.

Havana is not the place we think of regarding Chinatown, right?

Getting back to the article in my hometown’s local paper…

I wondered why the Chinese needed armed guards. The article stated the guards prevented the Chinese from escaping, but there was a bit more to the story than fear of the Chinese, or as they were referred at that time “the Celestials.”

The Chinese workers who were on the train through Douglasville reached the United States via the Angel Island Immigration Station in San Francisco where they would be examined for diseases such as trachoma. Some were detained and sent back to China.

The sugar companies who were hiring the Chinese workers had to put up a $500 bond for each transit, and it was a requirement for two guards to travel with each car as the train moved across the United States. The guards worked in six hour shifts and helped to keep order including maintaining cleanliness. A U.S. Sanitary official was required to accompany each train as well.

I was able to locate an issue of The Station Agent, a publication of the Southern Pacific railroad where an entire article was devoted to the Chinese labor trains that continued to travel across the United States in the 1920s.

The article continued to stress that although the Chinese workers were traveling across the country under armed guard, they were paying customers of the railroad and should be treated with respect and kindness. Every attempt was made to make them comfortable.

Most of the workers traveled in groups of ten to twelve having family bonds in common or the fact that they were from the same village. Every attempt was made to keep the groups intact which wasn’t always easy due to the language barrier. Apparently, lots of shuffling around took place before each train was set to leave.

Once the workers were situated on the train they were not allowed to leave until they reached their destination. The trip would take six days. Each person was allowed to keep their food basket which usually contained a few canned goods and rice as well as their hand luggage.

Railroad personnel would pick up whatever else was needed along the route which means it’s very possible that Douglasville stores were visited for needed items when they stopped in town on September 28, 1920.

Three times a day the cry of “Quon Suey!” would ring out through the cars. Talking would cease, card games would stop and suddenly from under the seats would come the food baskets and tea pots.

“Quon Suey!” translates to “Hot Water!” and it was exclaimed not by the Chinese, but by the guards who also had the job of heating water for tea three times each day.

A sentence from The Station Agent article got my attention stating, “It is a tribute to their patience and forbearance that they can accept these conditions of travel without complaint and make the best of what the average American would be an almost intolerable confinement.”

I have to agree.  I cannot imagine finding it necessary to leave the only home I’ve ever known for an uncertain future.

The trip ended once the train reached New Orleans or Key West where the Chinese workers would board steamers bound for Havana, Cuba.

Chinese immigration to Havana continued until the Chinese Revolution in 1959.

It was a normal day at Atlanta’s Union Depot in March 1895. Dozens of horse-driven cabs were parked … END_OF_DOCUMENT_TOKEN_TO_BE_REPLACED

When I throw out the name John Wilkes Booth what comes to mind? Perhaps you think about Booth’s … END_OF_DOCUMENT_TOKEN_TO_BE_REPLACED

I was busy working on my column for the Douglas County Sentinel, so I did not see the delivery … END_OF_DOCUMENT_TOKEN_TO_BE_REPLACED