You are here: Home / Blog / Georgia On My Mind / Wheelbarrow Politics

It would be a rare person these days who hasn’t entered the political fray in one way or another, right?

We all have opinions and smart phones and social media gives us platforms to proudly display our thoughts to the world, and we do.

No, this won’t be a rant professing my political views…just a bit of a then and now observation.

I long for the times when political differences were ruled by respect and common decency when folks could agree to disagree, but continue to relate to one another. I long for a time when the extent of excitement regarding a political disagreement might be a bet over which candidate would win an election.

This photo crossed my Facebook newsfeed yesterday morning from an Austell group where I’m a member. I’m using it with the permission of Dixie Hendrick Garner. 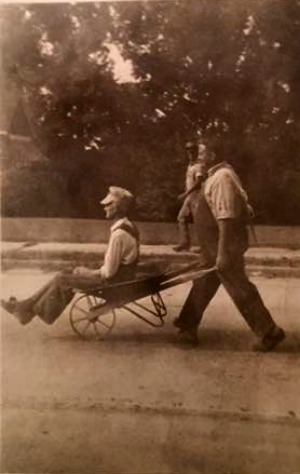 That’s Ernest Gordon being pushed in a wheel barrow by Bufford “Fat” Doss as the result of a political bet.  You see, Gordon backed Herman Talmadge while Doss backed Melvin E. Thompson in the special election held in 1948.

The special election was ordered by the Georgia Supreme Court as a result of a situation in Georgia history known as “The Three Governors Controversy” which occurred when Eugene Talmadge died in December, 1946 as governor-elect, and unfortunately, Georgia’s constitution didn’t provide a clear path regarding how to proceed since Talmadge passed before he was sworn in as governor.

Many Talmadge supporters wanted Eugene’s son, Herman, to take his father’s spot stating the General Assembly should choose between the men who had come in second and third in the election. Eugene Talmadge had run unopposed, but noting his health, many supporters had written in Herman’s name.

The Lt. Governor-elect, Melvin E. Thompson thought the governor’s office should be his, while the outgoing governor, Ellis Arnall, felt it proper for him to take another term in office.

Three men claimed the governor’s office.  It was a mess.

The Georgia Supreme Court ruled a special election should be held, and Herman Talmadge won with a little over 97% of the vote resulting in the picture you see above.

These wheelbarrow rides were nothing new, apparently.

Some months ago I had run across a newspaper article dated August 25, 1910 where J.B. Cook, a merchant near Red Oak supported Hoke Smith for governor while his friend, Dr. J.B. Carmichael was just as enthusiastic over Brown. So, they decided the loser would push the winner from Atlanta to College Park in wheelbarrow.

I’ve ridden that distance from Atlanta to College Park down Highway 29, and I can’t even imagine pushing someone in a wheelbarrow.

Brown lost the race, so Dr. Carmichael had to push while J.B. Cook got to ride.  It was said that Dr. Carmichael was tall and slender while Cook was not so tall, but made up for it in weight.

Cook made a short speech from the wheelbarrow before they took off from the corner of Alabama and Forsyth Streets at 3 p.m. one afternoon.

At 3:45 p.m. the pair was seen near Terminal Station, where the Richard B. Russell building is located today, with Dr. Carmichael taking a bit of a rest.

Later that evening the pair had not arrived in College Park. It was assumed Dr. Carmichael was still resting.

I’m not sure if J.B. Cook ever got his entire ride, but it would appear that in 1948, Ernest Gordon did, and I’m certain all four men remained friends despite their political differences.

It was a normal day at Atlanta’s Union Depot in March 1895. Dozens of horse-driven cabs were parked … END_OF_DOCUMENT_TOKEN_TO_BE_REPLACED