You are here: Home / Blog / Every Now and Then / A Tragedy in Villa Rica 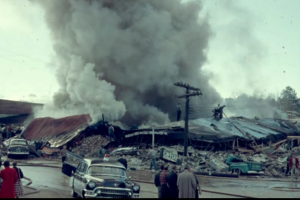 One of the first lessons I used to teach at the beginning of the year involved various images where I attempted to teach students that every piece of ground has a history.

At one point during the lesson we would move as a group down to the playground. My purpose was not recess but to encourage students to make some observations.

I would gather everyone in a group and explain historians never know what they are standing on unless they truly observe their surroundings.

We would agree as a group that we were standing on the recess field, and then I would ask, “Is that all we are standing on?”

We would then move to the edge of the playground which was on the edge of a hill. Down below us was a flat overgrown area. Sticking out of the hill in various places we could see all sorts of debris. Rocks, signs, rebar, glass, wires, bricks and assorted hunks of concrete littered the hillside.

I would ask students to brainstorm possible reasons for the debris sticking out of the hillside, and then I would tell them the story.

Many loads of dirt were hauled in to build up the playground at Villa Rica Elementary, but before the dirt was dumped the town brought in remnants of a section of town – an entire section blown to bits.

Each day we held recess on the physical remnants of Villa Rica’s tragic past.

At this point a few of my students would nod their heads in agreement and state their parents had told them about the explosion while other students were amazed.

December 5, 1957 is most certainly remembered as the date for the worst tragedy to hit the town of Villa Rica in its long history.

It was just a normal quiet morning. People were out Christmas shopping, running errands, and voting in the municipal elections.

Shortly after 11 a.m. lives were changed forever when a natural gas explosion ripped through the downtown area killing 12 and injuring at least 20 others.

In the days that followed it was determined a natural gas leak under Berry’s Pharmacy caused the explosion. Four buildings were destroyed and several others were damaged.

From the historical marker that has been placed in front of the old Berry’s Pharmacy location – “The tragedy highlighted the need for both an organized local emergency response unit and the use of odor in the natural gas supply.

In terms of injury and loss of life, the explosion remains the most catastrophic event in Carroll County history….”

My good friend and fellow historian, Elaine Bailey published a book regarding the tragedy titled Explosion in Villa Rica.

You can purchase the book at the above link.

The event was a highlight in the newsreels of the day including this one:

It was a normal day at Atlanta’s Union Depot in March 1895. Dozens of horse-driven cabs were parked … END_OF_DOCUMENT_TOKEN_TO_BE_REPLACED

When I throw out the name John Wilkes Booth what comes to mind? Perhaps you think about Booth’s … END_OF_DOCUMENT_TOKEN_TO_BE_REPLACED

I was busy working on my column for the Douglas County Sentinel, so I did not see the delivery … END_OF_DOCUMENT_TOKEN_TO_BE_REPLACED