You are here: Home / Blog / Georgia On My Mind / Ms. Souther Provides a Tour of Peachtree Street

In 1962, William Bailey Williford did the citizens of Atlanta and folks like me a huge favor when he researched and wrote his book Peachtree Street published by UGA Press.  I’ve accessed the book dozens of times at my local library and the few chapters that appear online with Google Books, but recently I FINALLY decided to purchase a copy for my office library.

Of course, the book is no longer in print, so I had to purchase a used copy. I didn’t give it much thought as I pulled the title up on Amazon.  There were several available. I looked for one that was noted as “great, like new” and hit the purchase button.  I don’t even remember which used bookseller I got it from. 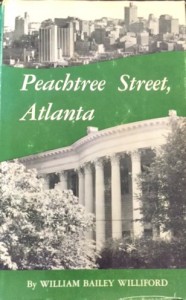 I got an extra little gift with my purchase.

It seems the former owner of the book put their name in the front and had inserted little cards throughout with notations about certain homes and properties that had a special meaning for her. Perhaps she loaned the book to a friend, and wanted to share some thoughts.

Whatever the reason, I’m intrigued and grateful the used book seller didn’t remove the cards.

As you see here the owner of my book was, as close as I can make out, “Alta or Alto Souther”. 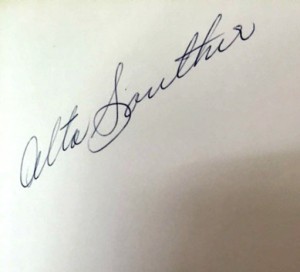 Always on a search for the “story behind the history”, I decided to see if I could find out more about her. I Googled, I searched on Ancestry, I looked through some 1960s papers and found nothing.  It’s a bit frustrating, but I could look again next week and go right to a record or mention that would lead me right to a few details about her life, but so far…..I’ve got nothing other than the notations in the book she left. 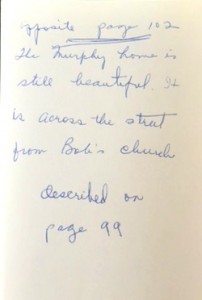 The card says…..”Opposite page 102….The Murphy home is still beautiful.  It is across the street from Bob’s church.  Described on page 99.”

The Murphy home was known as Hillcrest, which was located between Fourteenth and Fifteenth Streets. The home sat on an elevated lot with a sweeping expanse of green lawn along Peachtree Street.  John E. Murphy, a banker, owned the home. A ballroom was located on the third floor, and it was there where many Atlantans enjoyed dances that would continue all night followed by a breakfast at dawn. Williford’s book advises, “The horses which in the early years stood in the frosty air awaiting the departure of their owners were always provided  with blankets in the event the drivers had not brought their own.”

I had to wonder about Bob’s church referred to on the note card. Could she mean The First Church of Christ, Scientists that has stood at Fifteenth Street since 1913-14?

The next card confirmed that for me. She had inserted a card at the page with an image of Mrs. Livingston Mims stating, “Mrs. Mims taught Bob’s mother Christian Science. She has a lovely picture of her.  Mrs. Mims was the wife of Livingston Mims.”

Major and Mrs. Mims built their home on the northeast corner of Peachtree and Ponce de Leon. Mrs. Mim’s was very active socially and was a proponent of Christian Science.  Major Livingston Mims was a former Confederate, businessman, and former mayor of Atlanta.

Today, the location of the Mim’s home is the Georgian Terrace. Their doors opened in 1911.

Of course, I did pick up on the fact that “Bob” could be Mr. Souther and might go by the name Robert. I tried Ancestry again, but couldn’t find a connection to anyone named Alta or Alto.

The next card was left in the book at page 103 and refers to the photo of Rhodes Hall. Ms. Souther writes, “This home still stands, is now the Archives Building and had the original draperies and furniture downstairs a few years ago when I went there searching history records about the Huguenot Society, etc. Very interesting.”

Rhodes Hall is one of THOSE places Atlantans should visit. It was designed in 1904 by William F. Denny for Rhodes Furniture magnate A.G. Rhodes, and is constructed entirely of Stone Mountain granite.  The house was home to the Georgia State Archives from 1930 to 1965. For a few years between 1984 and 1992 the home was a haunted house attraction for Halloween, but today serves as a museum.

What would we do without “Bob’s church” to serve as a directional marker?  <smile>

The home where Washington Seminary was located was originally called La Collina and Williford states it was the “grandest home to ever grace Peachtree” built by Clifford L. Anderson, an attorney, state legislator, and founder of Trust Company of Georgia.

In 1912, the home was purchased by Washington Seminary, a school for girls that had originated in 1878 in the West Peachtree Street home of General and Mrs. W.S. Walker.

Anita and Lola Washington, grand-nieces of George Washington, were owners of the school. Williford states, “From its earliest days Washington Seminary tactfully avoided such words as “select” and “exclusive”, but it was without question “fashionable” from its first day to its last.”

The grand home was torn down in the early 1950s to make way for the Riviera Motel  which also succumbed to the wrecking ball eventually.

Of course Alta Souther had to leave a card in the book where the Mitchell mansion was pictured. This was the childhood home of Margaret Mitchell of Gone with the Wind fame where she had her debut as well as her first marriage to Berrien K. Upshaw.

Here’s the card that says, “Not there anymore. Hated to see it torn down several years ago. Big office buildings there now.” 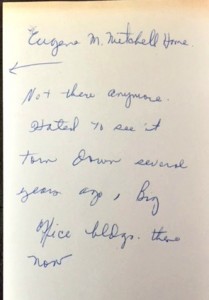 Yes, Eugene M. Mitchell, attorney and member of an Atlanta pioneer family built the home on the eastside of Peachtree just north of Seventeenth Street. The home was torn down by Stephens Mitchell in 1952 and replaced by an office building.

The next note refers to the Speer mansion stating, “Long ago I went to a dance in a home very similar to the Speer residence which was next door to this one. Torn down long ago, too!!”

The Speer residence was built in 1887 for John Silvey, Mrs. Speer’s father, at the corner of Marietta Street. The Marietta Street location had once been the site of Mr. Silvey’s father, Drury Silvey, and was described as a towered and turreted Romanesque Revival. During the Atlanta occupation in 1864 members of Sherman’s staff took over the home.

In 1903, Mr. and Mrs. Speer had each brick, stone, and board numbered and moved the house to Peachtree Street where it could be rebuilt. It was torn down in the 1950s following Mrs. Speer’s death at 97.

The final card left in the book makes reference to the Raoul mansion stating, “House at far left is now Atlanta Chapter of Red Cross. Worked in the upstairs room in rear where the three windows are. Floors are real old and squeaky!”

Originally home to the William Greene Raoul family, this home was on the west side of Peachtree north of Sixth Street. Raoul was president of the Mexican National Railroad and filled the home with eleven children. The property boasted the first tennis court in the Atlanta area.

The Red Cross did indeed take possession of the home as Ms. Souther states. It was lost to fire in 1991.

So, while I enjoy my new-old-classic book regarding the history of Atlanta’s most famous street and read through the chapters at my leisure (not that I have much of that these days….), I’ll remain on the alert for my “friend” Ms. Souther.

As much as I would love to sit down and discuss Peachtree Street with a Raoul, Mims, Mitchell, Speer, Anderson, Rhodes, or Murphy family number, I think at this point I would welcome a “sit-down” with Ms.Souther.

I’m already in love with the few impressions she left behind….just for me!