You are here: Home / Archives for Siege of Atlanta

One of the best-known movers and shakers in Atlanta in the years leading up to the Civil War was Marcus A. Bell – the A stood for Aurelius, a nod to Marcus Aurelius of ancient Rome fame. In fact, Bell was born in 1828 in Elbert County, and his parents named some of their children for men of ancient … END_OF_DOCUMENT_TOKEN_TO_BE_REPLACED 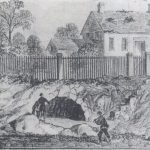 The war finally reached Atlanta in July 1864 – the Battle of Peachtree Creek was fought on July 20, the Battle of Atlanta was waged on July 22, and the Battle of Ezra Church was decided on July 28, but it would be five long weeks until the city of Atlanta would surrender to Union forces on September … END_OF_DOCUMENT_TOKEN_TO_BE_REPLACED